On Wednesday, March 2, Senior Resident Magistrate Florence Macharia slapped her with a life sentence for defiling the boy and a further 10 years for filming the act.
“A Kenyan woman, Edda Wakesho, has been sentenced to life imprisonment for filming herself sexually molesting  a 4-year-old boy and posting it online. 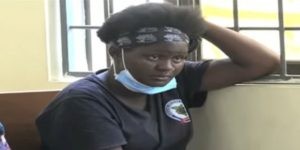 The 21-year-old househelp in Kiembeni Estate, Mombasa, filmed herself engaging in the act with the minor and later posted it online for financial gain.

On Wednesday, March 2, Senior Resident Magistrate Florence Macharia slapped her with a life sentence for defiling the boy and a further 10 years for filming the act.

Ms Wakesho was charged with defiling a minor and making obscene materials.She committed the offence between June and October 2021.

According to the investigating officer, the accused is part of a child pornography syndicate that collaborates with rogue house helps to abuse children and film the acts.

Wakesho in her defence said that she innocently accepted a friend request from Facebook and was introduced to a page where people post nude photos and videos.

The convict said she was recruited into the syndicate with a promise of being paid lots of money.

The court heard that the minor’s mother received a video clip of the wicked act from a foreign mobile number.