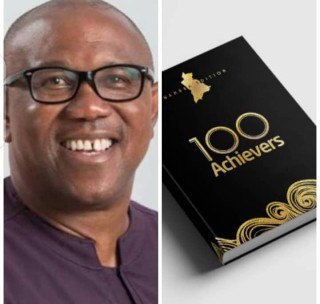 The 100 Anambra Achievers Team has urged political leaders in Nigeria to emulate Mr. Peter Obi’s leadership style,  particularly his knack for identifying and nurturing talents, as well as his passion for honoring the best in the society, adding that this could help in reshaping the society.

Briefing newsmen, one of the project coordinators, Barr. Lizzy Anyaonu showered encomium on the former Governor who she noted has continued to remain relevant long after he has left office. Barr. Lizzy stated that Mr. Peter Obi has been able to remain relevant in the political scheme of things because of the right things he did in Anambra State as the Governor. “He was the chief marketer of Anambra State as a Governor and kept on promoting the best from the state in every field of human endeavor.

We cannot forget how he continued to promote and pushed to limelight the works and achievements of  some of firsts  like late Dr. Alex Ekwueme, late Prof. Dora Akunyili, Prof. Stella Okunna, late Prof chike Obi etc. and it was him who started the recognition of our topflight achievers and even went further to honor some of our professors who brought glory to Anambra through their works for humanity namely; Prof. UcheAmazigo who was a former director of World Health Organization, Prof. Francisca Okeke who won the L’oreal award in physics in faraway France etc. He, it was who started the one million naira monetary reward to Anambra first class graduates and we need not state here the kind of impact that gesture had in the society,” the group said.

Barr Lizzy further stated that the former governor did not just stop with  promoting only the academia,he rather went further too to promote our genuine businessmen and industrialists who have maintained integrity in building their brand and in their other dealings and at one time took them to the president so he could listen to their problems and help them solve it.

“Peter Obi was the chief marketer of the Innoson Brand and before you knew it, the federal government bought into the great vision. He did not only patronize his vehicles but made sure that other Innoson’s products were widely diffused in West Africa. Obi had tremendous respect for the best from the state and would do anything to encourage them to participate in building our society”.

When Peter Obi left office, our team saw the need to continue in the same trajectory in order to build a society where values like hard work, integrity, perseverance are recognized”. Barr. Lizzy urged our leaders particularly the incoming ones to see the need to toe this line in order to create a better society.

She stated that while they were selecting those achievers, they had selected people Mr. Peter Obi would be very proud of and conducted the selection meticulously as if the former governor was there directing the process.

Barr Lizzy added that the masterpiece publication will be unveiled soon and promised it’s going to be one of the best research works in our state which every onye Anambra will be proud of.

Our bests in business, in academia, law, medicine, engineering, leadership, media etc were well captured. According to Barr. Lizzy, the group has made contact with Guinness world book of record to know if there had been such a book that has this number of collation of  interviews in one book . She stated that when finally unveiled, the publication which contains practical lessons on how people can get to the top in their various careers will be on sale on platforms like Amazon, ebay, and will be distributed in all secondary schools and universities in Anambra state.

"A Must Watch:- PURE DRIVING"
SEE MORE VIDEOS
Follow Us on Social Media: