France defeated Argentina 4-3 yesterday in an exciting match and progressed to the quarter-finals where they would face Uruguay.

It was a match where Messi could barely get on the ball but still provided two assists.

Kylian Mbappe proved too much with the 19-year-old scoring twice and also wining his team a penalty.

And Didier Deschamps has praised his team for closing out Messi and securing victory.

“I think my Argentinian counterpart wanted to give him more freedom to come behind our central midfielders, but we adapted to neutralise him,” Deschamps said.

“[N’Golo] Kante was always marking him.

“We had two chances; stopping him getting on the ball, which we did a lot, and when he had it we had to have one on him and one just off him.

“He was subject to a unique vigilance. We knew the connection between [Javier] Mascherano, [Ever] Banega and Messi, if you want Messi to have less influence you have to block the other two.”

The 31-year-old could yet have played his last World Cup. 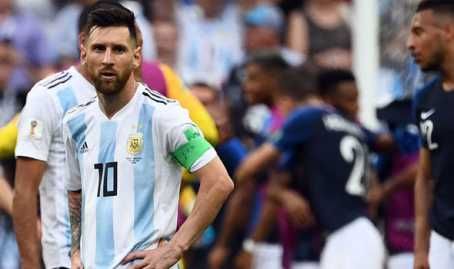