Hundreds Of Ethiopian Men Volunteer To Fight For Russia In Ukraine

Hundreds Of Ethiopian Men Volunteer To Fight For Russia In Ukraine 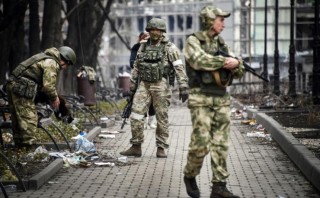 Hundreds of Ethiopian men are lining up outside the Russian embassy in Ethiopia in hopes of fighting for Russia in the war against Ukraine.

Several hundred men were seen registering their names with Ethiopian security guards outside the Russian embassy. While the men were not seen entering the establishment, they were asked to provide proof of previous military experience, as first reported by Reuters.

A man who came out of the embassy later told the Ethiopian men that they would be contacted when they were needed, adding that Russia had enough forces in Ukraine for now.

Droves of Ethiopian men went to the embassy after a social media post claimed fighters who would join the war could receive a payment of $2,000.

The Russian embassy later issued a statement dismissing claims that it was recruiting foreign fighters to join the war. The embassy said the men who were queuing outside the mission only wanted to show their solidarity with Russia.

The Ethiopian Foreign Ministry praised the Russian statement, saying it refuted the “unfounded reports of recruitment for the Russian Armed Forces.”

Rumors of Russia recruiting fighters in Ethiopia come after the Kremlin in March announced it would recruit 16,000 fighters from the Middle East to take part in the war in Ukraine.

Since Russian President Vladimir Putin first announced the start of the invasion of Ukraine on Feb. 24, Ethiopian Prime Minister Dr. Aboy Ahmed has remained neutral and urged both sides to exercise restraint.

“We express our concern at the escalating rhetoric that risks further intensifying the issue and call upon all concerned to explore the multiple pathways to reach an understanding,” the prime minister said.

Ethiopia has neither condemned nor voiced support for Russia amid the war. However, the country refused to vote on a UN General Assembly resolution condemning the invasion of Ukraine.

Despite the administration staying neutral, many Ethiopians have voiced support for Russia, which they see as a friendly nation. Additionally, thousands of Ethiopian military personnel were trained in what was then known as the Soviet Union. Since the war began in February, many Ethiopians have been calling and emailing the Russian embassy to voice their support, the press attache for the embassy in Addis Ababa told VOA News.