I Am Ready For Lagos APC Primaries, Says Ambode 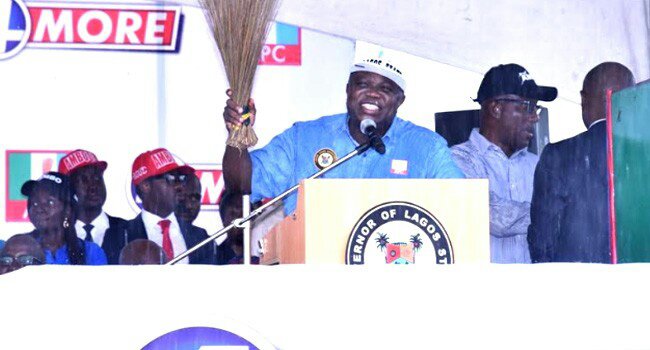 The Lagos State Governor, Mr Akinwunmi Ambode, has said that he is ready to participate in the All Progressives Congress (APC) primary election for the state.

Amobode made the announcement on Wednesday through the Commissioner for Information, Kehinde Bamigbetan.

The APC primaries where members across the state are expected to choose the party’s flagbearer through direct primaries is slated to hold on Saturday, September 29, 2018.

The Governor said he is restating his readiness in line with the choice of the party in Lagos State and the validation given to the direct primary preference by the Governor’s Advisory Council (GAC).

“As our great party approaches Saturday, September 29th, 2018, earmarked for the direct primary election to choose the candidate to fly our party’s gubernatorial flag at the next general election, I am happy to restate my commitment to participate in that process having procured and submitted my nomination form and having formally declared my intention to seek a second term to continue on the path of unprecedented growth and development that our State has witnessed since 2015”.

Ambode also thanked the National Leader of the party, Bola Tinubu, party elders, executives; GAC members; all APC members and every Lagosian “whose support, understanding and prayers have assisted me in no small measure to be an instrument of greatness”.

The governor said that in seeking a re-election he is approaching the founding fathers and teeming members of the party with a “grateful heart, open arms and a pledge to open and deeper attention to the concerns of this one, big family”.

He noted that a return ticket will guarantee the stability of the State’s growing economy; ensure the continuation of the growth, the development it has witnessed over time and ensure that the opposition does not take root in the State.

The governor commended co-contestants for the courage and commitment to the party and urged party faithful to come out and vote peacefully in all the 20 Local Governments and 245 wards where the election will take place.