I Was Pregnant 3 Times For Apostle Suleman – Halima Abubakar 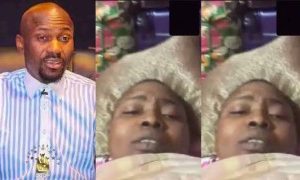 Sex Scandal: I Was Pregnant Three Times For Apostle Suleman; He Did Sleep With Me While I Was Still Bleeding – Nollywood Actress, Halima Abubakar Alleges;

Nollywood actress, Halima Abubakar, has alleged that she was pregnant on three occasions for Apostle Johnson Suleman, the General Overseer of Omega Fire Ministries International.

Halima had in 2022 called out Suleman on social media while claiming the pair once dated.

She added that the cleric also had sexual affairs with several actresses, including Shan George and Iyabo Ojo.

On Instagram, Halima said that her life was in danger and that the cleric should be held responsible for whatever happened to her.

“Please don’t worry about me. But you can hold Johnson Suleman responsible, just in case. You can’t do anything, though. Nigerians are aware. If anything happens, Johnson, it’s you,” she had posted on Instagram.

However, in a recent interview, the actress claimed the duo dated for six years.

In a now-viral clip of the interview, Halima was asked if she was ever pregnant for Suleman and why she did not keep the pregnancy, she said, “Yes, I was once pregnant for him. When I lost the baby, he was crying, you would think it’s real because he was shedding tears that I lost his child.

“It’s crazy. I got pregnant three times for him. The last one got me bleeding…I had to take tablets to stop it.”

On how long it took the bleeding to stop, she replied “For four years, I actually just came out since I have been in a long spiritual battle; the blood just stopped rushing, you won’t believe it.

“He was sleeping with me even while I was bleeding. That’s the dangerous part of it, and he was telling me he couldn’t sleep with any other person, that’s why.

“The whole thing took me unaware because I was naive and not a spiritual person. Even when I’m on my period, he does that (sleeps with me).”

This is not the first time Apostle Suleman will be involved in sexual scandal.

In 2021, Another Nollywood actress, Chioma Ifemeludike, claimed she was in a sexual relationship with the overseer of the Omega Fire Ministries Worldwide.

The actress and producer, who has been in the Nollywood industry for nine years, had revealed that she had no idea that the man of God was quite prominent at the time she had an intercourse with him.

Chioma on her Instagram page recalled that the first deal of her encounter of romp sex with the man of God was sealed through a hookup by another lady, Linda Clems, noting that at the second time, she clearly recognised him because they exchanged numbers during the first romp and communicated thereafter.

In a video obtained by SaharaReporters, she added that her public confession came after her spirit continued to torment her, and she needed to make restitution for her sin.

SaharaReporters also in February 2021 reported that a former pastor of the Omega Fire Ministries, Mike Davids, accused Suleman, of sleeping with his wife.

He added he was ready to expose the truths behind Stephanie Otobo’s sex scandal.

The case of Otobo, a Canada-based singer, came up in 2017 and 2018 when she accused Suleman of sexual relationship – a controversial scandal that plagued the church and attracted the attention of Nigerians for months.

Davids in a video had noted that he and Suleman both knew how they got Otobo to come to the church in Auchi, and apologise over the scandal and how they persuaded her mother too. Davids had accused Suleman of sleeping with his wife, Faith Edeko, who currently heads an Abuja branch of the church.

He had said, “I left the church (Omega Fire Ministries) of my freewill. You were never the one who sent me out of that ministry. I was tired of your ungodliness as a leader. And that was the major reason I left that ministry. So, forget those manipulations and cheap lies.

“We all know the part I played in the Stephanie Otobo saga. You know as much as I do. How much involved I was in bringing that saga to a halt. I don’t even need to mention names. You knew how we got Stephanie Otobo to come to the altar and apologise to mama (Suleman’s wife) and brought Stephanie Otobo’s mother to Auchi.

“I am coming to that issue because you are pushing me to that extent, Apostle Johnson Suleman as much as I knew what happened. Thirdly, I am also aware that my account has been frozen. You have also released policemen to get me arrested.

In January 2018, Otobo accused Suleman of impregnating her and breaching a promise to marry her.

She claimed she had sex romps with the pastor in Italy, New York and Nigeria.

Otobo said she had pictures of the pastor exposing his private parts, evidence of which it said would emerge in court.

In March 2017, SaharaReporters also released a report on how Suleman, who was at the center of an adultery scandal, gave a $76,000 brand-new Mercedes-Benz 450 GL to Nollywood star Daniella Okeke in 2016.

Ms. Okeke was previously named by Otobo, Apostle Suleman’s estranged lover, as being one of the other women in his life.

For her part, the actress in 2016 proudly displayed the Mercedes-Benz SUV GL 450 on her Instagram page in front of a brand-new house where she parked it.

After her name was revealed by Otobo at a press conference covered extensively by SaharaReporters, some Nigerians invaded Ms. Okeke’s Instagram questioning the source of her wealth given that she had not featured in any prominent movies in recent years.

The more inquisitive among them took advantage of a new website for vehicle registration in Lagos State which unveils the ownership of any vehicles by its number due to a bug on the web page, and discovered that one of Okeke’s most prized possessions, the posh Mercedes-Benz car, was registered to “Apostle Suleman Johnson.” 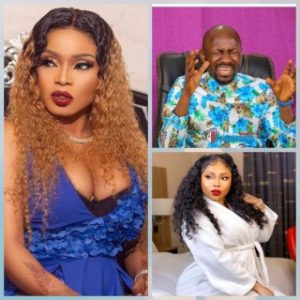