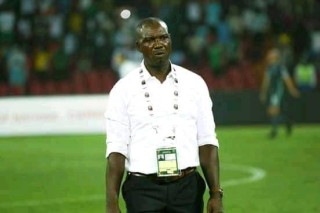 Former Super Eagles interim coach, Austine Eguavoen has revealed that he would be delighted to manage the senior national team anytime he’s called up by the Nigeria Football Federation (NFF).

Nigeria failed to qualify for this year’s World Cup in Qatar after losing to the Black Stars of Ghana on the away goal rule last month.

Speaking during SuperSports’ program, Monday Night Football, Eguavoen said he would take the opportunity to coach the Super Eagles again if he is called upon in the near future.

“If there is still an opportunity for me, I will want to coach the Eagles again, but not at this moment, maybe later,” Eguavoen said.

“If I am called upon to lead the team again, I will definitely take up the job. I am still one of the good coaches in the country. I can still prove a point, it is just a matter of time.

“No regrets taking up the job. When you are called to serve the nation, I could not refuse them,” he added.