Dakkada FC Head Coach, Umar Danlami, says he has no plans of leaving the club despite the dwindling fortunes of the Akwa Ibom based NPFL side, Completesports reports.

Dakkada currently occupy the 19th position – a relegation spot – in the 20-team NPFL on 43 points from 36 matches. And Danlami’s side faces an uphill task of avoiding demotion in the remainder two rounds of fixtures, with Shooting Stars, Kano Pillars, Katsina United, on 45 points each, and Heartland (44 points) all in the big contest to retain their NPFL status. MFM FC delegation spot has been confirmed.

Danlami while speaking exclusively to Completesports.com, says leaving the club is not an option at this critical period of the club’s lean fortunes.

“I could have done that before now but that’s not an option for me. I confront my problem head-on. Winners don’t quit,” Danlami told Completesports. 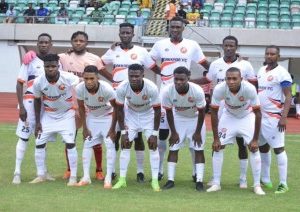 According to Danlami, he enjoys a good working relationship with his employers despite the club’s predicament in the season.

He thanks the Akwa Ibom State commissioner for sports, Hon. Monday Uko and other members of management for their support.

“Despite the challenges, the team has been playing good football just like you saw and the management believes in me, very grateful to the Honourable commissioner”.

Though on the red line of the league table, Danlami still keeps a positive thought of hope of survival.

“We all know what is at stake and we are doing everything humanly possible to achieve our positive thoughts,” he stated.

Speaking on his last two matches against Enyimba FC and Sunshine Stars, Danlami said they are working hard in preparation ahead of the clashes, but taking it one at a time.