Idris Wase: No Government Has Touched Lives Of Ordinary Citizens Like APC 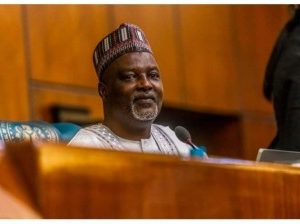 Idris Wase, deputy speaker of the house of representatives, says no government has touched the lives of “ordinary citizens” as that of the All Progressives Congress (APC).

Wase spoke on Wednesday, when he received a delegation from the Asiwaju Bola Ahmed Tinubu (ABAT) support group at the national assembly, Abuja.

The group was on a courtesy call to the deputy speaker to solicit support for Bola Tinubu, presidential candidate of the APC.

Wase said the house of representatives, “particularly members of the All Progressives Congress, shall collaborate with every organisation to ensure victory for the Tinubu/Shettima ticket”.

“We have good product to sell; this is somebody that had turned around the economy of Lagos within a short time and has built people across the country, irrespective of region or religion,” he said.

“I charge you all to go out in full force with your head high, seeking for those votes as you have a good product to sell to Nigerians. I urge you not to relent in ensuring the victory for our candidates.

“We have a product too in terms of presidency of Asiwaju to sell. He’s somebody that has turned around the economy of Lagos state. He has built capacity; he has built people. So, you should go out in full force with your heads high up in seeking those votes.

“I keep repeating it; there’s no candidate in any political party that can match the quality and candidature of asiwaju Ahmed Bola Tinubu. But you won’t go to sleep because we are politicians. We believe in vote counts, and that is why we should go out to canvass for votes from all Nigerians.

“I want to assure you that by the grace of God, that APC will come with a very large number overwhelmingly in terms of support. We will also win majority of the seats of the national assembly not a majority in terms of one, two, three, but an over whelming majority because members have done so much.

“No government has touched the lives of the ordinary citizens of Nigeria who have nothing to do graduates, the old, the young in terms of the various palliatives they have been given, like the government of APC has done. Our wish is to consolidate on these.”

The deputy speaker added that the President Muhammadu Buhari administration also has “packages” it gives to the “vulnerable in the society in terms of old age”, similar to what is done in other countries.

In his remarks, Oyinkansola Okiwuyi, national coordinator of the group, said the organisation will rely on the support of the deputy speaker to ensure victory for the Tinubu and all APC candidates in the 2023 elections.