If You Give Girl Belle, You Abandon Am With No Child Support, We Must Use You Crack Joke-Ccomedian I Go Save Shades Ubi Franklin 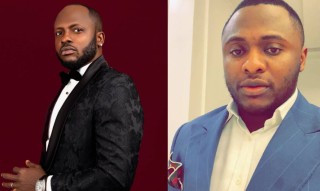 Nigerian comedian, I Go Save has taken a swipe at music exec, Ubi Franklin who on Monday, March 28, threatened to give anyone who insults him the Will Smith treatment.

Shortly after the video of Will Smith slapping Chris Rock for making a joke about his wife, Jada Pinkette, at the Oscars went viral, Ubi took to his Instagram page to call out Bovi.

According to Ubi, Bovi made a joke about his children during the Headies award last year. He said he even sent some of Bovi’s friends to him to express his anger at the comedian’s joke which he found distasteful.

Well, Comedian I Go Save has taken sides with Bovi. In a video he shared on his Instagram page, I Go Save said some celebrities have seized the Will Smith incident to trend. In an apparent reference to Ubi Franklin’s comment about Bovi, I Go Save said anyone who gets a girl pregnant, abandons her and does not pay child support must be used as content for jokes.

Ubi is yet to reply him.