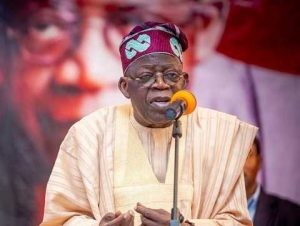 The suit dated and filed on July 4 on behalf of the organisation in Abuja by Mike Nwankwo.

The Inspector-General of Police, Usman Baba has been sued by a civil rights group over his failure to prosecute Bola Tinubu, the presidential candidate of the All Progressives Congress on allegations of perjury.

The group known as the Incorporated Trustees of Center for Reform and Public Advocacy dragged the IGP to a Federal High Court in Abuja.

The suit dated and filed on July 4 on behalf of the organisation in Abuja by Mike Nwankwo, has the Nigerian Police Force and the IGP as 1st and 2nd respondents.

The CSO said that the legal action against the police was necessitated by the IGP’s alleged refusal to take action on its petition against Tinubu over an offence it claimed the presidential candidate was indicted by the Lagos State House of Assembly in 1999.

The applicant maintained that by Sections 214 and 215, of the constitution and Section 4 of the Nigerian Police Act, 2020, the Police have the statutory responsibility to “prevent, detect and investigate criminal allegations whether brought to their notice by individuals, person or persons, corporate bodies, institutions etc”.

Consequently, the applicant in the suit marked: FHC/ABJ/CS/1058/2022, is asking the court for, “an order of mandamus compelling the respondents to comply with Sections 31 and 32 of the Police Act and Section 3 of the Criminal Justice Act, 2015 in respect of alleged crime laid out in complaint of the applicant encapsulated in the letter of June 16, 2022 received by the respondents on the same date.

The complaint was titled: “Demand for criminal prosecution of Senator Bola Ahmed Tinubu under Sections 191,192 and 463 of the Criminal Code Act, Law of the Federation of Nigeria, 2004 Consequent upon the Findings of the Lagos State House of Assembly Ad-hoc Committee, 1999”.

The applicant claimed that by Section 31 of the Nigerian Police Act, the respondents are duty bound to investigate alleged crime brought to them and report their findings to the Attorney General of the Federation or of a state, as the case may be, for legal advice.

The organisation added that by Section 32(1) of the Police Act, “A suspect or defendant alleged or charged with committing offence established by an Act of the National Assembly or under any other laws shall be arrested, investigated and tried or dealt with according to the provisions of this Act, except otherwise provided under this Act.”

Okonkwo claimed it has the legal competence to invoke the jurisdiction of the court to compel the respondents to discharge their legal, Constitutional and public duties in line with the law.

The plaintiff lamented that its two letters dated June 16 and 27 to the respondents wherein it demanded the prosecution of Tinubu over alleged perjury have until now been ignored, adding that respondents also “have not notified the applicant of any action taken on the said letter”.

According to the applicant, following a letter by late legal luminary, Chief Gani Fawehinmi, in 1999, the Lagos State House of Assembly had set up an Ad-hoc Committee to investigate the alleged act of perjury wherein the Committee had in its report on page 13 stated that, “however, on question of providing false information on oath (sections 191 and 197) we are satisfied that the statement of the governor’s educational qualification which he has admitted were incorrect were not intended…”

The applicant in its petition to the IG claimed that Tinubu lied on oath in his form CF 001 he submitted to INEC in aid of his qualification for the governorship election in Lagos State in 1999.

The applicant further claimed that Tinubu “forged all the educational certificates he listed in his INEC Form CF 001 which he admitted he did not posses in annexure C”.

“For purpose of clarity, Senator Bola Ahmed Tinubu in the said INEC Form deposed on oath that he attended Government College, Ibadan and University of Chicago, USA when in actual fact he did not.

“On the strength of the above, we respectfully demand that you initiate the criminal proceedings of Senator Bola Ahmed Tinubu consequent upon the express findings of the Lagos State House of Assembly as captured above”.

Meanwhile, no date has yet been fixed for hearing of the fresh suit.