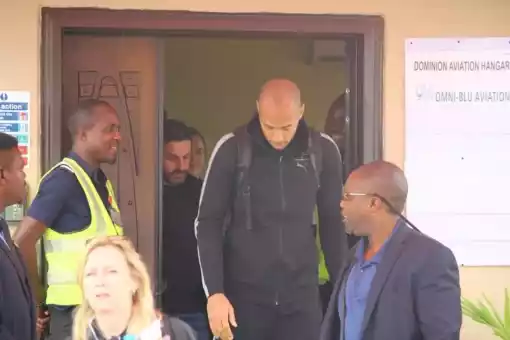 Visiting football legend, Thierry Daniel Henry, who arrived Nigeria on Sunday in a sport track sweater  could not take long to change his wears, to something that makes him looks like a traditional ‘Igwe’ from Nigeria.
Nigerian football fans often addressed the retired French professional footballer as ‘Igwe’ during his cative days in Arsenal and his national team because he played like a royalty and with great commanding exploits.
His style of play resonates with the huge numbers of Arsenal fans in Nigeria and he was lovingly christained as Igwe no wonder his Nigeria fans dressed the legend guest in a traditional attire from the Igbo clan. 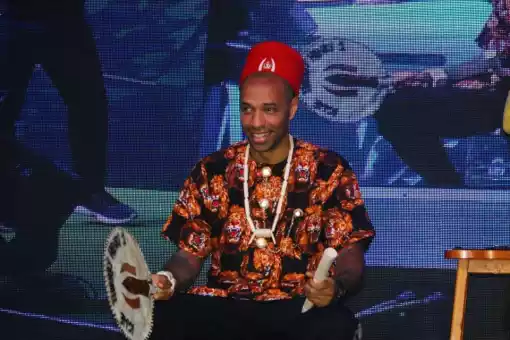 After a welcomed brief press meeting the Arsenal legend was since dresed in Igbo Traditional attire.
Check out pictures below to see the retired French professional footballer in a compeleted Enugu-like Igbo attire… The red cap on his head was like that of a local chief from ‘Okigwe’.
See the pictures below maybe you will believe me. 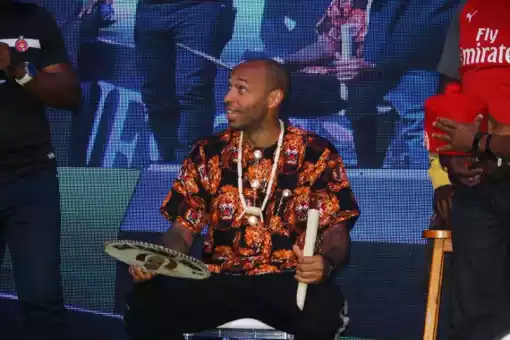 Guinness Nigeria has fulfilled their promise of bringing Arsenal legend and Sky sports pundit, Thierry Henry to Nigeria.
The international football icon is scheduled to meet the winners of the ‘Be a Front Row Fan’ consumer promotion, which is currently running across the country.
He will also officially unveil Nigeria’s brand new Made of Black brand ambassador and join well known names at an exclusive Nigerians Made of Black celebration event.