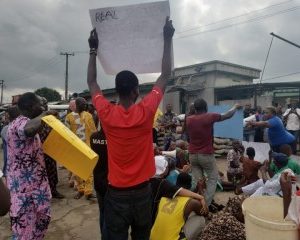 Some residents in the Oko-Oba area of Lagos State, have trooped out, Wednesday, to protest what they described as indiscriminate disconnection and estimated billing, allegedly by the Ikeja Electricity Distribution Company.

They are also protesting the arrest of two members of the community, Imam Fatai Shaheed and Odewale Jamiu, whose arrests were said to have been allegedly initiated by the Oko-Oba unit of the IKEDC. They are currently gathered at the Abbattoir Police Station, in the area, asking for the release of the arrested two.

The Oko-Oba community had been at loggerheads with the Ikeja DisCo over issues of estimated billing before now. In June 2022, The PUNCH reported how the residents under the aegis of Oko-Oba/Orile Development Union, also trooped out in protest against similar issues, saying they were not ready to make further payments for electricity if they were not provided with prepaid meters.

Speaking to The PUNCH, Wednesday morning, one of the residents, Funmi Ajayi, alleged that the police were harassing their members because of estimated billing.

Another resident, identified simply as James, said the DisCo began disconnection of lights to some houses on Tuesday when they couldn’t meet the estimated bills.

They (the DisCo) called a meeting and complained that we were supposed to generate N90 million for them but we were only to able to pay N50 million and that they would start disconnection. They came to disconnect the exact power poles of the organisers in the community. There was an altercation between some of them, suddenly they brought a Mobile Policeman from Alimosho to Oko Oba. 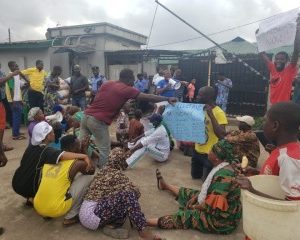 “The policeman brought out his gun. He shot in the air,” James said.

He added that during an altercation which ensued at the point of disconnection, on Tuesday, an official of the IKEDC had assaulted one of the residents. He claimed that the official also faked to have fainted and was thereby taken to the hospital.

“This morning, as early as 5:30 am, the Divisional Police Officer of Abbattoir Police Station went to mobilise his men to arrest one Alfa and Jamiu.

“The community is now protesting at the station and from there, they will go and shut down the office at Emmanuel, Oko Oba,” he said.

Efforts to get the reaction of the IKEDC proved abortive. When contacted, the Undertaking Manager of the Orile-Agege unit of the IKEDC, identified simply as Mr Musa, said he could not speak to the press on the matter as he was not authorised to do so.

Messages sent to the official lines and handles of the IKEDC had not been responded to as of the time of filing this report.

The Lagos State Police Public Public Relations Officer, Benjamin Hundeyin, had also yet to respond to a message from our correspondent on the said arrests.