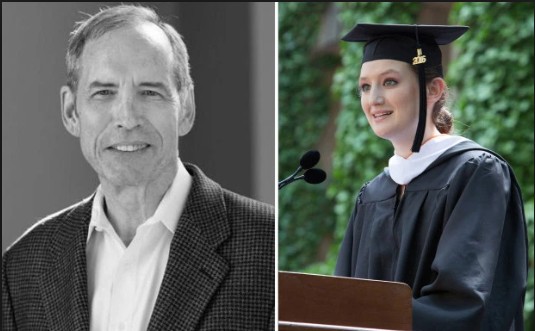 A top university student who recently graduated with a masters degree from Oxford University has revealed she has got engaged to her ex professor – who is 46 years her senior.

Cameron Platt, 25, previously an undergraduate at the Ivy League university Princeton in New Jersey, USA, and just finished her master’s degree at the University of Oxford, recently gushed on Facebook about Lee Clark Mitchell, who will be 72 in June.

Cameron wrote that she met Lee, who has served as chair of Princeton’s English Department, when she took one of his classes during her sophomore year five years ago.

“I was taking his lecture course on Henry James and William Faulkner,” she said on April 18.“Lee was little more than a stranger to me then, but he captivated me with his brilliance, sensitivity, and passion.

“His lectures changed forever the way that I think.”

By the time Cameron was graduating at the top of her class with a degree in English and a certificate in theatre, Lee had become a “devoted mentor” to her, she said.

But after graduating, she left for the University of Oxford to pursue a master’s degree in English and United States history.

During her two years in England, loving thoughts of her grey-haired prof frequently came to mind, she said.

“I was surprised to find how much I still thought of Lee — and soon I understood that I felt something for him that I’d not fully acknowledged before,” Cameron wrote in the Facebook post.

“At the end of my two years in Oxford, after much reflection, and with encouragement from my wonderful friends, I resolved to shoot my shot.”

The young scholar reached out to Lee last September and asked him out for a date at the Metropolitan Museum in Manhattan, where they frolicked through the galleries like “shy teens, eager but tentative,” she wrote.

She said Lee spent most of the first date trying to figure out if it was actually a date, while they were both “unsure of how to test new boundaries with each other.

“At last, to our amazement, we broke through. Something then sprouted from a seed that neither of us had known that we’d planted, and we realised that the force of feeling that we’d long had for each other and called by other names (admiration, wonder, devotion, gratitude) held within it the hope and the potential for love,” Cameron went on.

Cameron, who is 46 years younger than her fiancé, wrote in the post that she kept their relationship “private” for the past half year, but once they became engaged after about seven months of dates, she was ready to make the relationship public.

She acknowledged that the announcement “will come as a surprise to many” and that the couple had concerns about their relationship, given their “different stages of life.” But she said that more importantly, she’s deeply in love with Cameron.