In Brazil, Biden’s defense chief to call on region’s militaries to respect democracy 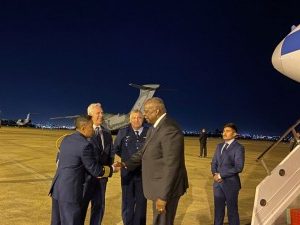 Those expected remarks – while not specifically directed at Brazil – are likely to turn heads there ahead of its Oct. 2 election, where Brazilian President Jair Bolsonaro formally launched his re-election bid on Sunday by saying “the Army is on our side.”

The right-wing populist has publicly cast doubt on the validity of Brazil’s electoral system, and some polls show him down almost 20 percentage points against former President Luiz Inacio Lula da Silva of the Workers Party.

Austin, a retired Army general, will address the bi-annual defense ministers’ conference and hold bilateral talks with regional delegations on Tuesday and Wednesday.

“To the venue as a whole, he is going to bring a very strong and clear message on the need for militaries to respect democracies,” a senior U.S. defense official said, speaking on condition of anonymity. The official declined to “prejudge” what Austin might say, however, to his Brazilian counterparts.

Bolsonaro, a former Army captain, told diplomats earlier this month that the Brazilian military should be called in to help secure transparency in the Oct. 2 election. He has pushed electoral authorities to accept a parallel vote count to be carried out by the armed forces. They have ruled that out.

The maneuvers have unnerved Brazil-watchers in Washington, including in Congress.

“(Austin) should simply make clear that the military should stay out of the election and allow any disputes about the election to be resolved by constitutional means,” U.S. Congressman Tom Malinowski, a Democrat and member of the House Foreign Affairs Committee, told Reuters.

“And he should remind his counterparts that U.S. law restricts our cooperation with foreign militaries that participate in anything that might resemble a coup.”

Military leaders have repeatedly said Brazil’s armed forces will respect any result of the election.

Some military officials have made headlines, however, by echoing Bolsonaro’s comments about potential weaknesses in Brazil’s voting system.

“POLITICAL TEMPEST”
Bolsonaro has based much of his political career on nostalgia for Brazil’s 1964-1985 military dictatorship, disparaging Congress and the courts while filling his government with current and former officers from the armed forces.

Thomas Shannon, a former U.S. ambassador to Brazil, said Brazilians were looking for signs about how their military might act if Bolsonaro refuses to accept defeat at the ballot box.

“Secretary Austin … is walking into a political tempest in which Brazilians are trying to measure the level of institutional support for a potential effort to undo the results of the elections,” Shannon told Reuters.

Former U.S. officials including Shannon cautioned that Brazil doesn’t respond well to threats, and that any messaging has to be focused on the U.S.-Brazil partnership “as opposed to saying: ‘Don’t do this and don’t do that.’”

“But it has to be (a message) that makes clear that the U.S.-Brazil military-to-military partnership depends on a common commitment to democratic values and practice,” Shannon said.

The U.S. State Department has recently affirmed its confidence in Brazil’s electoral system, a rare step during a heated, polarizing campaign.

“We don’t want to get in the middle of Brazil’s elections, at all. But we want to ensure that the fact (is known) that we believe Brazil’s electoral system is credible and capable of managing a free and fair election,” the senior U.S. defense official said.

Nicholas Zimmerman, a former senior White House official, said “the risk that some elements of the military go along with the anti-democratic efforts … must be taken seriously.”

As political tensions mount, the head of the country’s Electoral Court, Edson Fachin, warned earlier in July that Brazil is at risk of facing an even more serious incident than the Jan. 6, 2021, attack on the U.S. Capitol