India Buys 3 Million Barrels Of Russian Oil At A Discount

United States President Joe Biden’s campaign to unite the globe against the Russian invasion of Ukraine is being challenged not only by adversaries such as China but also by the world’s most populous democracy, India. 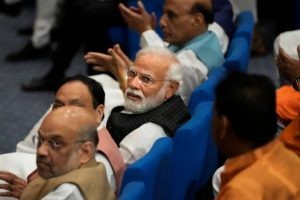 An Indian government official said on Friday that the country will increase its imports of Russian oil, allowing it to boost energy supplies at a discount as its economy struggles to recover from the coronavirus pandemic. The official, who was not authorised to talk to reporters and spoke on the condition of anonymity, said the latest purchase was three million barrels.

Although India is not alone in buying Russian energy — several European allies such as Germany have continued to do so — the decision conflicts with Biden’s efforts to isolate Russia’s economy with sanctions.

The increased flow of oil could further strain the relationship between Washington and New Delhi, which has already been tested by India’s recent procurement of advanced Russian air defence systems.

The White House is still considering whether to enact sanctions on India for that purchase. The issue is being looked at with a “different spin” following Russia’s invasion of Ukraine, according to a US official familiar with the Biden administration’s deliberations. The official spoke on the condition of anonymity to discuss internal decision-making.

The oil deal is a reminder of how the war in Ukraine has created a complicated geopolitical balancing act for Biden. Even as he tries to rally countries to oppose Russia’s invasion, he also sees India as a critical partner for countering China’s rising influence in Asia.

Russia has long been a point of friction in US-India relations, but the White House believes the two democracies have more that’s in common than that divides them.

India is a member of the Quad, an international partnership that also includes the US, Australia and Japan, and the leaders of all four nations are slated to meet this year in Tokyo.