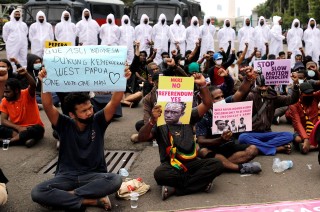 Separatists have waged a low-level campaign for independence in the resource-rich region for decades, saying a 1969 vote overseen by the United Nations that brought the former Dutch colony under Indonesian control was illegitimate.

In a statement on Tuesday, three independent U.N. experts said that between April and November 2021 they had received allegations that indicated several instances of extrajudicial killings, including young children, enforced disappearance, torture and enforced displacement of at least 5,000 Papuans.

The statement from the U.N. experts cited estimates that 60,000 to 100,000 people had been internally displaced in Papua since an escalation of violence in December 2018.

“Thousands of displaced villagers have fled to the forests where they are exposed to the harsh climate in the highlands without access to food, healthcare and education facilities,” said the experts.

In a letter sent to Indonesia’s government on Dec. 27, the experts also highlighted increasing violence since 2021 and said there has been a “surge” in raids to capture armed separatists that led to arbitrary arrests and detentions.

One of the cases cited was that of a two-year old who died after a gunfight, though separatists and security forces had differing accounts as to how the child died.

Citing reports that aid to displaced Papuans was being obstructed, the experts called for humanitarian access and for independent monitors and journalists to be allowed access.

“The experts called for urgent humanitarian access to the region, and urged the Indonesian government to conduct full and independent investigations into abuses against the indigenous peoples.”

Describing the U.N. experts’ statement as “biased”, Indonesia’s permanent mission to Geneva in a statement said the news release disregarded “verifiable data and information” that has already been submitted by Indonesia on the same allegations.

It denied authorities had obstructed aid or carried out forced displacements and said people had been displaced due to a range of factors including natural disasters and tribal conflict.

The statement said security forces needed to be deployed in some areas because of attacks against civilians by “armed criminal groups.”