Inter Sneak Past Juve To Move Three Behind Leaders Milan 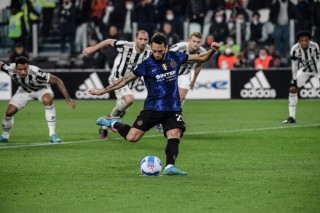 Inter Milan kept their title defence alive with a 1-0 win at Juventus thanks to a controversial retaken penalty which moved them three points behind leaders AC Milan and Napoli, 3-1 winners at Atalanta. The champions came away from the Allianz Stadium in Turin with a narrow win in a bad-tempered match decided by Hakan Calhanoglu’s spot-kick which was scored at the second attempt five minutes into first-half stoppage time.

Inter stay third and extend to four points the gap between themselves and third-placed Juve, who could find themselves 10 points off the pace with seven games remaining should Milan beat Bologna on Monday after their unbeaten league run ended at 16 matches.

A match which started after an Italian and Ukrainian singer belted out a rendition of John Lennon’s ‘Imagine’ to promote peace in Ukraine turned ugly almost immediately after kick-off, with rough tackles and niggly play which was dominated by the wasteful home side.

Events turned on the final few minutes of the opening period, with bedlam breaking out after Inter were awarded their spot-kick for Alvaro Morata treading on Denzel Dumfries’ foot. Calhanoglu’s weak first effort was saved by Wojciech Szczęsny and from there chaos ensued, with Inter’s players wheeling away in celebration after the ball was clumsily bundled in by Juve’s defenders.

However a VAR check showed that Matthijs de Ligt, who stopped Calhanoglu from scoring on the rebound, had encroached in the area before the Turk missed his penalty, allowing him a second chance to slam home the opener which was taken with gusto.

That goal was enough for Inter to snatch a win from their fiercest rivals who went closest through substitute Denis Zakaria’s 72nd-minute shot which was tipped onto the post by Samir Handanovic.