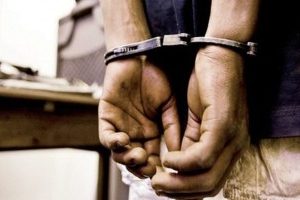 An Islamic cleric, Isah Mustapha will spend the rest of his life in prison for r$ping an 8-year-old girl in his house in Lagos state.

This comes after the Lagos State High Court sitting at Ikeja sentenced Mustapha to life imprisonment for defiling the minor.

At the trial before the presiding judge, Justice H.O Oshodi, the eight-year-old victim, told the court that the convict had carnal knowledge of her in his house in 2017 when her mother sent her on an errand. She recalled that Mustapha called her on her way back.

“When I was about to get to our apartment, the defendant called me back saying he wanted to send me to my mother to collect onions from her and bring to him downstairs. So, I went upstairs to collect the onions, which my mother gave me to give to the defendant downstairs,” she said

The victim stated that as she was about to return home after handing the onions to Mustapha, the cleric called her back, saying he was not done sending her on an errand.

“He said I should enter his house, but I said no. I later entered so he would not tell my father that I disobeyed him. He then said I should take off my pant, but I said no. He later took it off himself and his trousers too, then he slept on me. He put his private parts inside me and had s$x with me” she said

The mother of victim got wind of the dastardly act when she was about to wash her clothes and saw bloodstains on them.

In his testimony, Mustapha admitted to sending the victim on the errand, adding that he only inserted his finger in her private parts.

The defence counsel, M.O. Ifarinde, pleaded with the presiding judge to temper justice with mercy as her client was a first-time offender.

However, the prosecuting counsel, B.T. Boye, urged the judge to hand the maximum sentence to the defendant to serve as a deterrent to others.

The judge, after considering the argument of the defense and the prosecuting counsel, sentenced the defendant to life imprisonment.