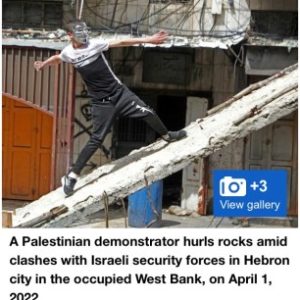 Israeli security forces killed three Islamic Jihad militants when they came under fire Saturday during a raid in the West Bank, police said, the latest deaths in a surge of violence.

The bloodshed comes amid heightened tensions ahead of the start of the Muslim holy month of Ramadan, that has seen violence spiral in Israel and the occupied West Bank.

On Saturday, Israeli police said security forces killed three members of the Islamic Jihad militant group who had opened fire during an operation to arrest them near the northern West Bank city of Jenin.

Four Israeli soldiers were wounded, one of them seriously, the police said.

The Israeli forces had intercepted “a terrorist cell on its way to an attack, and stopped the car in which they were travelling between Jenin and Tulkarem”, the police said.

Later on Saturday, the Israeli army announced that a “final terrorist connected to the terrorist cell that was thwarted overnight has been apprehended”.

“It was estimated that the final wanted suspect was going to attempt to carry out an additional terror attack” before being caught, it added.

The Islamic Jihad, which is based in Gaza, confirmed the “death of our three hero fighters” from the West Bank, identifying them as Saeb Abahra, Khalil Tawalbeh and Seif Abu Labdeh.

Palestinian prime minister Mohammed Shtayyeh said they were slain in an “extrajudicial killing” and “horrible crime”.

Israel’s leaders “must stop committing crimes and violations against our Palestinian people, respond to their legitimate rights to freedom and independence, end the occupation and establish their independent state with Jerusalem as its capital”, he said, quoted by the Palestinian news agency Wafa.

Israeli Foreign Minister Yair Lapid warned in a tweet on Saturday that the security forces would “act forcefully against any attempted attack” on citizens of the Jewish state.

Saturday’s clash is the latest in a spate of bloody violence in Israel and the West Bank since March 22.
>
On Friday, Israeli forces shot dead a 29-year-old Palestinian during confrontations in the West Bank city of Hebron, the Palestinian health ministry said.

Wafa named him as Ahmad al-Atrash, who it said was taking part in a protest against Israeli settlements and had previously served six years in an Israeli prison.

The Israeli army said that during a “riot” in Hebron “a suspect hurled a Molotov cocktail” at soldiers who “responded with live fire”.

Hebron, the biggest city in the West Bank, is home to about 1,000 Jewish people living under heavy Israeli military protection, among more than 200,000 Palestinians.

The Palestinian Red Crescent said 70 people were wounded in Friday’s clashes with the Israeli army in the Nablus area of the northern West Bank.

On Thursday, Israeli security forces raided Jenin after three fatal attacks rocked the Jewish state, leading to clashes in which two Palestinians were killed, according to the Palestinian health ministry.

Elsewhere in the West Bank on the same day, a Palestinian man who stabbed and seriously wounded an Israeli civilian with a screwdriver on a bus was shot dead south of the city of Bethlehem.

It followed an attack on Tuesday night in Bnei Brak, an Orthodox Jewish city near Tel Aviv where a Palestinian with an assault rifle killed two Israeli civilians, two Ukrainian nationals and an Arab-Israeli policeman.

A total of 11 people have been killed in attacks in Israel since March 22, including some carried out by assailants linked to or inspired by the Islamic State group.

Over the same period, eight Palestinians have been killed, according to an AFP tally, including two assailants in anti-Israeli attacks and six people the Israelis said had carried out attacks or were about to do so.

The West Bank, which has been occupied by Israeli forces since the 1967 Six-Day war, is home to nearly 500,000 Jewish settlers, living in communities regarded as illegal under international law.