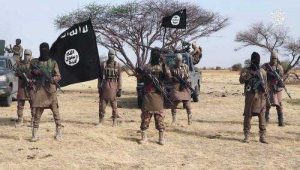 The slain officers were identified as Hosea Saba, Yahaya Yakubu and Aminu Sani, all attached to the B Division command in Suleja.

The Islamic State-backed faction of the Boko Haram, the Islamic State West Africa Province (ISWAP), formerly known as Jamā’at Ahl as-Sunnah lid-Da’wah wa’l-Jihād has claimed responsibility for the killing of a policeman in Suleja, Niger State.

Suleja is less than 20 kilometres away from the Federal Capital Territory, Abuja.

According to the group, an attack was carried out by “soldiers of the caliphate” with automatic weapons.

ISWAP added that the policeman’s rifle was taken away.

In May 2022, the group claimed it killed three policemen and a commercial motorcyclist in Suleja.

The slain officers were identified as Hosea Saba, Yahaya Yakubu and Aminu Sani, all attached to the B Division command in Suleja.

This is the second time ISWAP will be claiming an attack in Niger State.

If the attack was executed by the insurgents as claimed, it, therefore, indicates the expansion of the terror group, beyond the North-East to other parts of Northern Nigeria.