on healing after Will Smith slapped Chris Rock at the Oscars. 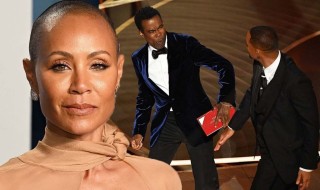 In a written statement at the beginning of Red Table Talk’s new season, the 50-year-old actor said:  ‘Considering all that has happened in the last few weeks, the Smith family has been focusing on deep healing.

‘Some of the discoveries around our healing will be shared at the table when the time calls. Until then…the table will continue offering itself to powerful, inspiring and healing testimonies like that of our incredibly impressive first guest.’

Pinkett Smith is back with her mother Adrienne Banfield Norris and daughter Willow Smith for the fifth season of their Facebook Watch chat show.

Red Table Talk returns less than a month after the Oscars ceremony, where Pinkett Smith’s husband, Will Smith slapped presenter Rock in the face before going on to accept the award for Best Actor.

Rock had made a joke at the expense of Pinkett Smith’s baldness due to her battle with alopecia.

Following the altercation, Smith apologised and resigned from the Academy on 1 April. On 8 April, the Academy moved to ban Smith from Oscars ceremonies for the next 10 years.