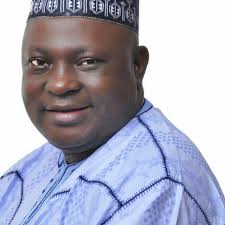 Jagaba, who came to the House under the ruling APC, had earliar announced in Kaduna that he was dumping the party to the opposition PDP.

In confirmation of his defection on Thursday’s plenary, he introduced himself thus: “I’m Hon Jagaba Adams Jagaba and I’m of the PDP.”

However, The speaker of the House of Representatives, Yakubu Dogara immediately said: “No, no, Jagaba. You can’t do this to me.”

Members to the PDP in the house started chanting their party’s name in jubilation, while members of the APC shouted “no, no.”

This lasted for a while before order was restored.

Dogara consequently said, “The truth is that I’m not aware and the House is not aware. As a ranking member, you know what to do. So, as far as we’re concerned, you’re still a member of APC.