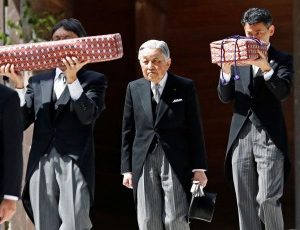 Japan’s Emperor Emeritus Akihito, father of the current emperor, received a diagnosis of heart failure last month but his condition has improved under treatment, an official at the Imperial Household Agency (IHA) said on Tuesday.

Akihito, 88, stepped down in 2019 in the first abdication of a Japanese emperor for two centuries, saying he was not sure he was still up to the demands of the job.

Heart failure is a condition in which the heart muscle does not pump blood as well as it should and can be treated. It differs from a heart attack where blood flow to the heart is suddenly blocked.

Akihito was diagnosed with heart failure due to a faulty heart valve at the end of June and has been undergoing treatment with medication and through restricting activity and fluid intake since then, an IHA official said.

“Currently he is living life as usual,” the official added.

Akihito, the son of Emperor Hirohito, spent much of his reign working to heal the wounds of a war waged across Asia in his father’s name, as well as bringing the monarchy closer to ordinary citizens.

He marked the 70th anniversary of World War Two’s end in 2015 with an expression of “deep remorse”, a departure from previous remarks, that was seen by some as an effort to cement a legacy of pacifism under threat from conservative Japanese nationalists.

“Looking back at the past, together with deep remorse over the war, I pray that this tragedy of war will not be repeated and together with the people, express my deep condolences for those who fell in battle and in the ravages of war,” he said on Aug. 15, 2015, the 70th anniversary of the war’s end.

A scientist by avocation, Akihito was the first heir in the Japanese imperial family to marry a commoner, Empress Emerita Michiko, whom he met on a tennis court.

Akihito and Michiko were warmly regarded for their role in comforting the public in tough times, as when they knelt to talk to people at shelters after disasters, an action seen as bringing them closer to the people.

Akihito also made an unprecedented TV address to the nation after a March 2011 earthquake and tsunami sparked a nuclear crisis and devastated much of northeast Japan, leaving nearly 20,000 people dead.

Heart failure describes a gradual weakening of the heart muscle and is a very common diagnosis, particularly among the elderly, said Gautam Deshpande, a doctor of internal medicine at St. Luke’s International Hospital in Tokyo.

“It’s a very, very liveable condition,” said Deshpande. “It’s absolutely not surprising for an on-the-go guy and at 88 years old.”