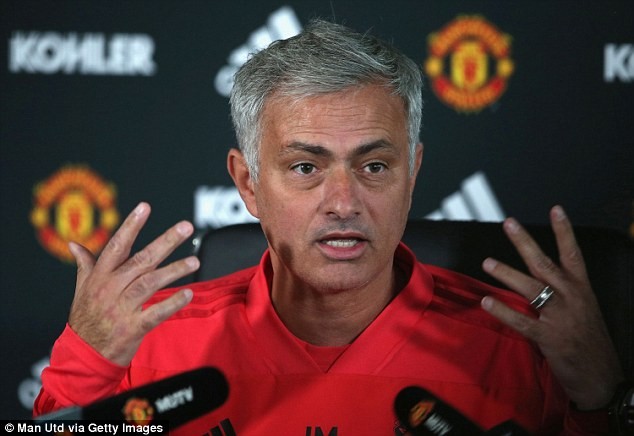 Manchester United coach, Jose Mourinho has hit back at football pundits amid criticism of the way he is handling Marcus Rashford at the club.

This comes after Jamie Carragher suggested the 20-year-old should leave the club and move elsewhere for regular playing times.

Speaking at his weekly press conference ahead of Watford clash, the Portuguese coach called football pundits ‘compulsive liars’ and said they are ‘obsessed’ with him.

‘I can expect that on Sunday I’m going to be highly criticised for not playing him at Watford tomorrow because some of the boys are really obsessed with me,’ the Portuguese said during a monologue of over four minutes on the suspended Rashford.

‘Some of them have a problem with some compulsive lies, so I can expect some of them will wake up on Sunday… and always the thing that comes to their mind is Jose Mourinho.

‘Some of the people everybody knows have double salaries, they work also for the clubs and of course they are not independent and they conduct things in the direction they want.

‘That’s obvious, human, is natural, not ethical but I accept. I feel sorry for them, there are more interesting things than Jose Mourinho.’

Mourinho also went as far as bringing out a piece of paper, where he detailed the games and minutes Rashford has played under him.

‘In the season 16-17, Marcus Rashford played 32 Premier League matches and 11 Europa League matches including the final. Three in the FA Cup,’ he added.

‘In 17-18 he played 35 Premier League matches, eight Champions League, five FA Cup – including the final – three League Cup and the Super Cup. He played a total of 52 matches with 2676 minutes.

‘The kid is a good kid, a good player, knows what United did for him, starting in the academy, then Mr Van Gaal’s support, my support, club’s support, new contract, new shirt, and selected every single match, since I was here, he was never one day out of selection because of my decision.’

‘So the people who are speaking about these minutes are a bit confused,’ he said. ‘Rashford is not Dominic Solanke, he’s not Ruben Loftus-Cheek, he’s not Dominic Calvert-Lewin.

‘United supporters – for you, and just for you – this is what we’re doing with Rashford, (Jesse) Lingard, (Luke) Shaw, (Scott) McTominay.’