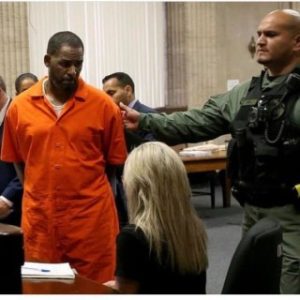 The 12-person jury in Chicago found Mr. Kelly guilty on Wednesday of six of the 13 allegations brought against him.

Nevertheless, Mr. Kelly was found not guilty on a number of counts, including plotting to sabotage his 2008 child pornography conviction.

In Cook County Court, the prosecution claimed that Mr. Kelly conspired to obstruct justice during the 2008 trial by intimidating and bribing a teenage girl’s family to keep them silent about a film he made showing him urinating on the girl during a sex act.

Derrell McDavid and Milton Brown, two of his former associates, were also tried for their involvement in the conspiracy in addition to Mr. Kelly. On Wednesday, Messrs. McDavid and Brown were acquitted of all charges.

In addition to watching three sex films that the prosecution claimed depict Mr. Kelly sexually abusing his 14-year-old goddaughter, the jury heard four weeks’ worth of testimony from over 30 witnesses.

Four women testified during the trial, including the key witness who went by the alias “Jane,” accusing Mr. Kelly of assaulting them sexually when they were young.