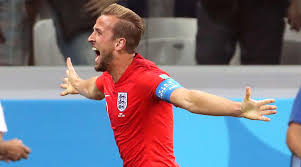 Kane scored his second goal of the game with a clever header as Gareth Southgate’s side recorded England’s first win in the opening game of a major tournament since they beat Paraguay in the 2006 World Cup.

England’s captain gave them the reward they deserved for a brilliant start by turning in the opener in the 11th minute after Tunisia keeper Mouez Hassen, who went off injured in the first half, clawed out John Stones’ header.

England ran Tunisia ragged in that spell but were punished for missing a host of chances when Tunisia’s Ferjani Sassi equalised from the penalty spot against the run of play after Kyle Walker was penalised for an elbow on Fakhreddine Ben Youssef.

Tunisia dug in to frustrate England in the second half but Kane was the match-winner with a late header from Harry Maguire’s flick, justice being done after referee Wilmar Roldan and the video assistant referee (VAR) had failed to spot him clearly being wrestled to the ground twice in the penalty area.

England play Panama, who lost 3-0 to Belgium earlier on Monday, in their next Group G game on Sunday, which kicks off at 13:00 BST and will be shown live on the BBC.

England’s first-half display contained much to admire but it was a sign of their wastefulness in front of goal that it took the injury-time intervention from Kane to seal victory.

England flew at Tunisia and racked up chance after chance, with only Kane’s early goal after Hassen clawed out Stones’ header to show for it.

Dele Alli saw a header deflected on to the woodwork, while Jesse Lingard suffered a similar fate as well as seeing Hassen somehow block another effort with an outstretched leg.

Jordan Henderson had a shot saved and other chances were spurned as England fashioned some magnificent approach play only to fail to apply the final flourish.

It was remarkable that Tunisia reached half-time on levels terms as they were often bewildered by England’s pace and movement before being spared by their generosity in front of goal.

Luckily for England, they have a world-class striker with a golden touch in Kane, who was coolness personified to carefully direct in the winner.

England can now move on to face Panama in Nizhny Novgorod with confidence and momentum.