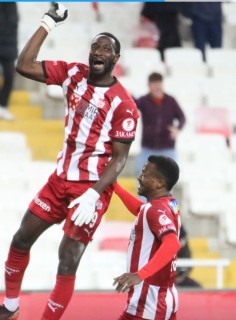 Olanrewaju Kayode was in action as Sivasspor defeated Fatih Karagumruk 1-0 in the semi-finals of the Turkish Cup on Wednesday.

Super Eagles skipper Ahmed Musa featured for Fatih Karagumruk but was replaced in the 65th minute.

Kayode, who was also in the starting eleven for Sivasspor, was replaced with nine minutes left to play.

Mustapha Yatabare was the hero for Sivasspor after netting the only goal in the 69th minute to send his side into the last four.

Sivasspor will now take on either Alanyaspor or Gaziantep in the semi-finals.

On Tuesday, Anthony Nwakaeme was an unused substitute as Trabzonspor beat Antalyaspor 2-0 to make it to the semis.