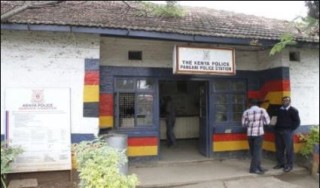 NTV Kenya confirmed the incident which occurred on Friday, March 18, unfolded in the middle of a well-lit road, after the officers had arrested the duo while reportedly robbing a lady of her phone.

The police officers believed to be attached to Pangani Police Station, a suburb in Kenya capital Nairobi, were seen ordering the suspects to lie on the ground before going ahead to shoot them at close range.

In the video, one of the police officers had fired two shots on the already immobile suspects. The video clip ended after the shots were fired.

It was later revealed that the two suspects purportedly belonged to a gang of four robbers, who had mounted two motorbikes and ambushed the said lady before dispossessing her of phone and gold earrings worth Ksh100,000.

“A crack team of officers drawn from Pangani Police Station and the DCI rushed to Pangani in search of the motorcycles,” local media reports said.

However, a police statement made by the said officers claimed they had challenged the suspects who declined to surrender, shooting at the officers instead, thereby forcing the ‘killer-cops’ to act in “self-defence” by gunning them down.

The unlawful killing has since drawn an ire in the public, especially among Kenyans, who are obviously miffed at the heightened spate of extra-judicial killings in the country, with civilians and human rights groups accusing police of applying excessive force on suspected criminals.

Local media’s attempts to reach the National Police Spokesman, Bruno Shioso, were futile as both calls and texts went unanswered.