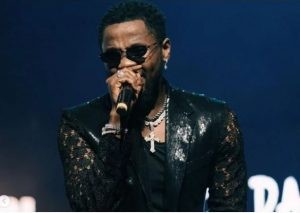 Kizz Daniel, the popular Nigerian singer, has been invited for questioning by the Lagos State Police Command.

He was invited for questioning over the seizure of a bus belonging to his dry cleaner.

It was gathered that the ”Buga” crooner confiscated the laundry bus of a company he contracted to do laundry for him.

Kizz Daniel reportedly impounded the bus on the grounds that his clothes which were worth N14 million were damaged by the laundry company.

Moreso, it was learnt that due to the incident, the owners of the laundry bus reported the incident to the men of the Ilasan Police Division who invited him for questioning.

He stated, “Kizz Daniel has yet to show up with the clothes he claimed were damaged. But the seized vehicle has been removed from his house. However, he ought to present himself to the police station today.”