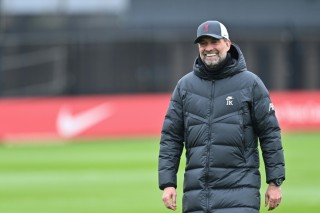 Liverpool manager Jurgen Klopp has insisted he is “happy” with Mohamed Salah’s contract situation. British media reports at the weekend suggested the Egypt forward, currently on a deal that will keep him at Anfield to 2023, was close to agreeing a new contract that would keep him with Liverpool until the end of his career.

Klopp, asked about the 29-year-old star striker’s contract position at his pre-match press conference ahead of Tuesday’s Champions League tie with Benfica, said: “I’m happy with it because there’s nothing new to say.

“It is good. The decisive parties are talking to each other and that’s all I need.” The German boss added he had a full squad available for Tuesday’s quarter-final first leg in Portugal, with Curtis Jones, Joel Matip and Trent Alexander-Arnold all fit.

“I think Curtis was just a little swelling (after Saturday’s 2-0 Premier League win over Watford), (but is) fine. Same with Joel,” said Klopp.

“And Trent trained now four or five days, not sure exactly, but he is ready as well.” Naby Keita, who missed Saturday’s match with a knee problem, also trained on Monday. Source: AFP