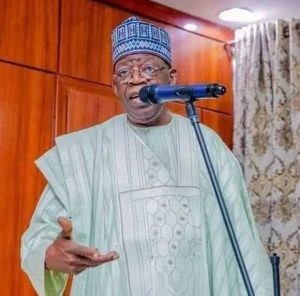 Asiwaju Bola Tinubu, the Presidential Candidate of All Progressives Congress, has issued a charge to Nigerians.

The politician, on Friday, charged Nigerians to rise against perpetrators of terror and destruction whose ultimate aim was to divide the country.

This was contained in a statement released by his media team on Friday in Abuja.

Suspected terrorists had, on Tuesday night, attacked the Kuje Medium Security Custodial Centre in Abuja, where they freed 600 inmates.

Among the prison inmates who fled the facility were 15 Boko Haram commanders who masterminded the March 28 attack on the Kaduna-Abuja train, in which eight persons were killed and over 68 passengers kidnapped.

Hours after Kuje Prison was bombed, the dreaded Islamic State’s West Africa Province claimed responsibility for the attack in a 30-second video that captured some gunmen shooting their way into the facility and setting vehicles ablaze.

The well-coordinated invasion, which happened simultaneously with another offensive launched on the convoy of the President, Major General Muhammadu Buhari (retd.), in Katsina State, shocked Nigerians and reverberated in the Western media.

During his visit to the affected facility on Wednesday, Senate President, Ahmad Lawan, had lamented that Tuesday’s attack on the Kuje Medium Security Custodial Centre by terrorists spoke volumes about the failure of the country’s security architecture.

Reacting to the mayhem in his Sallah greetings to Muslim on Friday, Tinubu lamented that he found the spate of violent attacks on innocent Nigerians distressing.

He said, “We face stiff challenges as a nation. Most troubling is the spate of violent attacks on innocent Nigerians. We must take a stand against terror and injustice. These evils lie forever outside our faith. Those who perpetrate such inhumanity do so in opposition to Islam and all that it means.

“To be true Muslims is to adhere to the principles of peace, tolerance, justice, and charity. Our faith asks us to stand against those perpetrating evil and visiting untold misery on others. And we must remain forever obedient to the kind and life-affirming principles of our faith.

“Yes, there are those who seek to bring this nation and Islam into disrepute through their destructive and violent actions. They seek to pitch brother against brother, neighbour against neighbour, and religion against religion. They want to break the peaceful order of society. But Allah has placed us here to build a better Nigeria by taking care and seeing all of its inhabitants as our brothers and sisters regardless of ethnicity, faith and region. This we shall do. And no amount of evil or terror from whatever quarter shall stop us from fulfilling what Allah has commanded us to do.”

The APC presidential flagbearer also praised members of the armed forces and uniformed men who continue to secure the country and protect Nigerians from imminent aggressions.

“We pray for our gallant soldiers and other security agents who, daily, sacrifice themselves to confront violent evil. Let us also remember President Muhammadu Buhari, our governors and other leaders in our prayers that they might find the wisdom and fortitude to surmount the challenges facing this country that, together, we can enjoy the benefits of a better Nigeria,” he said.

The national leader of the APC made a clarion call to Muslims not to relent on preaching peace and eschewing violence on fellow Nigerians.

“As we mark and celebrate Eid-el-Kabir, may we keep in remembrance the true meaning of this holiday. More importantly, let us always strive to conduct our daily lives in accordance with the clear and beneficial message of this occasion.

“May I use this moment of gratitude to extend my sincere greetings to Muslims in Nigeria and around the world as well as to people of other creeds and faiths.

“Thus, I ask you to continue to believe in the excellent nation Nigeria can be. Let us eschew violence and those who cause and sponsor it. Let us not forget the poor and vulnerable among us. Let us demonstrate brotherly concern and compassion and give succour to those unable to help themselves.

“This Eid, we beseech Almighty Allah to protect the weak, feed the poor and give us the courage and wisdom to subdue and defeat those who would seek to hurt the innocent and impair this nation,” he stated.