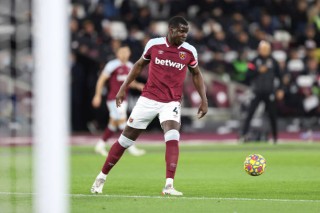 Newcastle fans could not help themselves as they taunted embattled West Ham defender Kurt Zouma with inflatable cats at the London Stadium on Saturday, February 19. The Magpies were visiting London for a crunch Premier League encounter against a top-four chasing West Ham as David Moyes reintegrated Zouma back in the team.

Zouma was a notable absentee from the 2-2 draw against Leicester City on Sunday, February 13 as he pulled out of the game at the last minute after ‘feeling unwell’.

The Frenchman was a hot topic of conversation for a better part of last week after he was filmed kicking his pet cat in a horrific video. His actions led to a string of events, including his cats being taken away by the RSPCA. 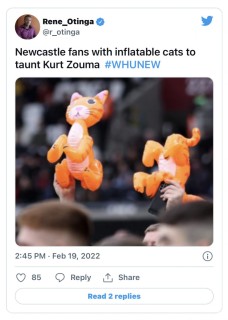 The defender was also slapped with the maximum fine of £250,000. “Hey Zouma” As expected, his first game since the controversial incident was likely to come with jeers from the crowd. Newcastle fans were particularly vocal as they openly jeered the West Ham star, while others chanted with teasing remarks.

According to The Sun, some of the fans could be heard chanting, “”Hey, Hey Zouma, Oooh, Aahh, I wanna know, how you kicked that cat.”

Other cheeky fans held up inflatable cats in what was a clear dig at the Frenchman. What Moyes said West Ham boss David Moyes previously weighed in on Zouma’s actions by saying the player had learnt his lesson by now.

“I think he’s probably really disappointed about what he’s done and he’s thinking about it a lot, no doubt, but overall we have tried to get him to move on,” Moyes said ahead of the Newcastle clash.

“We want him to concentrate on his training. He played very well for us against Watford the other week there, so we’re hoping that we can keep him at those levels of performance – we’ll be pleased with that.

West Ham lose ground as Arsenal win As far as the top four race is concerned, West Ham lost some ground thanks to the 1-1 draw against Newcastle. The Magpies continued their unbeaten run in the league, thanks to Joe Willock cancelling out Craig Dawson’s opener. Arsenal, on the other hand, secured a 2-1 win against Brentford as goals from Emiile-Smith Rowe and Bukayo Saka were enough to hand Mikel Arteta’s men the win at the Emirates.