Nigerian musician, Timaya has been called out by a lady.

The lady accused him of almost killing her sister with his car this morning at Ikate area of Lagos.

According to Instagram user, @whyte_26, the singer almost killed her sister before running away.

She disclosed that the incident occurred after her sister confronted him for hitting her car. The Instagram user alleged that the singer knocked down her sister during the confrontation and drove off.

The lady also revealed that after she reached out to Timaya over the incident on Instagram, he allegedly blocked her after reading her message. 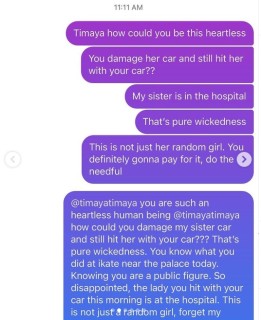