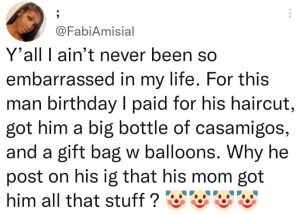 A lady has taken to Twitter to lament after she went all out for her man on his birthday and he credited someone else for her efforts.

The Twitter user identified as Fabi Amisial stated that she paid for his haircut, and got him a big bottle of Casamigos and a gift bag with balloons only for him to say that it was from his mother.

The actions of her man left her embarrassed as she stated that she hopes to meet someone who appreciates all she does because her intentions are pure.

The woman tweeted: “Y’all I ain’t never been so embarrassed in my life. For this man birthday I paid for his haircut, got him a big bottle of casamigos, and a gift bag with balloons. Why he post on his ig that his mom got him all that stuff ?”

She added: “At the end of the day, my heart and intentions were pure. One day someone will appreciate the things I do for them…”