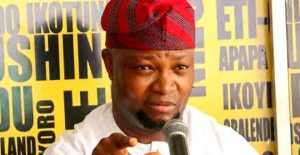 The All Progressives Congress, Lagos State chapter, has faulted the governorship candidate of the Peoples Democratic Party in the state, Olajide Adediran (popularly known as Jandor) and his running mate, Funke Akindele, over their visit to the owners of vehicles auctioned by the state government for traffic offences.

The state government had on Thursday auctioned 134 vehicles impounded at the Lagos State Taskforce compound in Alausa, Ikeja, for various traffic offences.

Adediran, with Akindele had visited two of the owners of the auctioned vehicles, Mr Lateef Kolapo and Mr Osinachi Ndukwe, during which they condemned the penalty as harsh and promised that the traffic law would be repealed by their government.

In a video seen by our correspondent on Sunday, Adediran, during the visit, said, “When you are on the wrong side of the law, yes there should be a penalty, but there shouldn’t be a penalty that will take our means of livelihood. That is what we are speaking against. So, my coming here is to see Mr Kolapo and assure him of hope.

“As we speak, that is the law of the state, unfortunately. But the coming government, by His grace, will repeal this law to ensure that irrespective of what you have done wrong on our road, we won’t take your means of livelihood.

“We will make sure we penalise but not to the point of taking what you use in catering for your family away from you.”

In another video also seen by our correspondent on Sunday, Ndukwe stated that he was sentenced to three months imprisonment for driving against the traffic, and his vehicle was impounded. During his jail term, he lost his three-year-old daughter and after he served the jail term, his bus was eventually auctioned.

Adediran and Akindele commiserated with Ndukwe for his loss and reiterated that despite their stance against violation of traffic laws, the state should not take away the offenders’ means of livelihood.