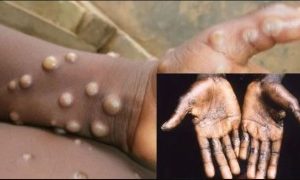 133 cases of monkeypox has been confirmed in 26 states by the Nigeria Centre for Disease Control.

The NCDC disclosed this in its latest monkeypox situation report released on Thursday.

Monkeypox is a rare viral zoonotic infectious disease transmitted from animals to humans that occur sporadically, primarily in remote villages of Central and West Africa near tropical rainforests.

Nigeria is one of the countries in Africa where the disease is endemic.

The report also showed that there were at least 357 suspected cases of the disease in the country.

“Overall, since the re-emergence of monkeypox in September 2017 and to July 24, 2022, a total of 869 suspected cases have been reported from 35 states in the country.

The NCDC noted that there are ongoing efforts to strengthen surveillance at national and subnational levels.

Chukwudi said, “At the moment, the best thing to do is to make sure vaccines are available; you can’t always be too careful. To tame the infection, the government needs to ensure that everybody is properly vaccinated and the early we start the vaccination, the better for us.

This is a re-emerging disease and this means that it becomes more dangerous than before; because it keeps mutating. The government needs to ensure that every state in the country has vaccines; establish a task force group to ensure that people are vaccinated and we will have fewer casualties among us.

“We can produce vaccines in the country because we did it before and we can do it again, we have the human resources but there is a lack of political will.”

Also, the immediate past President of the National Association of Resident Doctors, Dr. Uyilawa Okhuaihesuyi, urged the Federal Government to increase funding for the health sector.

“If there is adequate funding, the experts in the country can produce vaccines instead of depending on international bodies for vaccines,” he said.