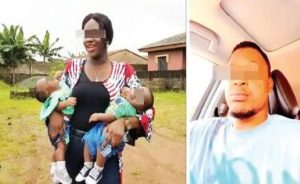 Bolatito Adeniyi, a mother, has made allegations against her lover.

The woman accused her erstwhile lover, Mayowa Oke, of tricking her and disappearing with their twin children, Taiwo and Kehinde.

Speaking to our correspondent on Wednesday, the 25-year-old said her former boyfriend called off their relationship two months after she became pregnant.

“When my mum called Mayowa’s mother to show support, she never showed up. We also called Mayowa; he showed up twice and never dropped any money. So, it has always been me, my parents and sister taking care of the children till they became one-year-old when their father started visiting them.

“Whenever he visited, all he did was to buy them beverages or give them N1,000 and return home. Sometime in January 2022, he visited and demanded to take the children to spend some time with him, but my mother opposed it because school had resumed.”

Adeniyi said 36-year-old Oke, who left angrily, returned on Sunday, April 17, when one of the twins was sick.

“During that time, he had relocated to Ikorodu, Lagos, where he was staying with his live-in lover, Chioma. So, when one of the children was sick, he visited and said he wanted to take the children to a church in Ikorodu.

“But he drove us to his sister’s place at Sango Ota. I was with his sister when he said he wanted to take the children somewhere to eat. After waiting for hours and they did not return, I called him and he said he was already in Ikorodu.

“He told me to wait at his sister’s place and promised to return the children on Wednesday. He never gave me the address of his house in Ikorodu, so I had no choice than to wait but he did not return and that Sunday was the last time I saw my children,” she added.

The aggrieved mother said she reported the matter at the Igbeba Police Station, Ijebu-Ode, but “policemen at the station demanded N100,000 to track him; they did nothing after we paid N30,000.”

She, however, noted that she reported the matter at the Lagos State Ministry of Justice and was directed to the state Domestic and Sexual Violence Response Team, from where she was referred to the Igbogbo Police Station for investigation.

In a letter addressed to the Igbogbo Divisional Police Officer on July 22, 2022, the DSVRT case manager, Mojisola Jack, said Oke’s actions constituted domestic violence “contrary to the provisions of the Protection of Domestic Violence Law, 2007, and Criminal Law of Lagos State, 2015.”

Adeniyi noted that at the Igbogbo Police Station, she was directed to a policewoman, one Juliana, who demanded N30,000 to track the suspect.

She said she left the station because she had no money.

“I have been contacting his girlfriend in Ikorodu, Chioma, for their address but she refused to disclose it. Mayowa (Oke) took my children, dumped them with her and she also has a baby.

“At times, Mayowa won’t come home for days or drop money for the children to feed.

“He has blocked my phone number. I have also called his girlfriend at Ajah, but she never disclosed the location in Ikorodu. I want my children back,” Adeniyi added.

Oke failed to answer his calls or respond to a text message sent to his mobile phone number as of the time this report was filed.

However, his mother said, “I am aware and I told Bolatito (Adeniyi) that whenever she called him, she should plead with him instead of talking angrily to him.

“I have told my son and begged him to return the children but he said she (Adeniyi) was not taking care of them. I don’t know where he lives.”

Chioma, when contacted, said, “Did she (Adeniyi) tell you that I knew her before? Has she met me before? I didn’t know her before.”

When asked Oke’s whereabouts, she disconnected the call.

The Lagos State Police Public Relations Officer, SP Benjamin Hundeyin, said the complainant had refused to show up despite being called by the Investigating Police Officer.

Regarding the N30,000 the policewoman allegedly demanded, Hundeyin said, “that allegation has been denied by the IPO.”

The Ogun State police spokesman, Abimbola Oyeyemi, had yet to respond to calls and a text message regarding the matter.