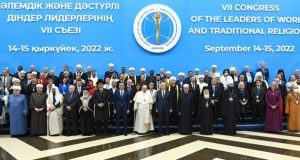 The congress was held in the Kazakh capital, Nur-Sultan, in the presence of 100 delegations from 60 countries.

The closing statement of the 7th Congress of Leaders of World and Traditional Religions adopted the Human Fraternity Document (HFD), cosigned by Grand Imam of Al-Azhar, Prof. Ahmad At-Tayyeb and Pope Francis, Pope of the Catholic Church, as expression of goodwill and a constructive approach for peace.

Article 13 of the final declaration stated, “We acknowledge the importance and value of the Document on Human Fraternity for World Peace and Living Together between the Holy See and Al-Azhar Al-Sharif (adopted by the UN General Assembly in resolution A/RES/75/200 of December 21, 2020), and the Makkah Declaration (adopted in Mecca in May 2019), which call for peace, dialogue, mutual understanding and mutual respect among believers for the common good.”