In response to the Russian military offensive against Ukraine, the Lithuanian administration on Monday, April 4, announced its decision to expel its Russian ambassador. 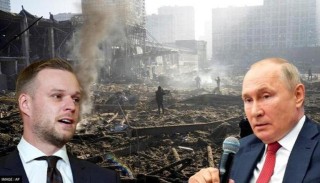 Lithuania’s Ministry of Foreign Affairs in their statement outlined that the ambassador of Russia to Lithuania will need to leave the country.

The government has decided to shut the Consulate General in Klaipeda in response to the ongoing military offensive against Ukraine at the behest of Vladimir Putin. The decision of the Lithuanian administration comes at a time when the military aggression by Russia has entered its 40th day today.

Lithuania’s Ministry of Foreign Affairs in their statement revealed that the representatives of the Russian Embassy in Vilnius who had been summoned to the Foreign Ministry have been informed regarding the decision.

Lithuanian Foreign Minister Gabriel Landsbergis asserted that the country has decided to lower the level of diplomatic representation with Moscow. He further added that the ambassador of Russia to Lithuania can return to the country in the near future. Furthermore, Landsbergis underlined that they express full solidarity with Ukrainians who have been suffering for long owing to Russia’s “unprecedented aggression.”

He also emphasized that Lithuania, in the strongest terms, condemns atrocities committed by Russian armed forces in occupied Ukrainian cities.

‘War crimes committed by Russian troops in Ukraine will not be forgotten’: Landsbergis

In the statement, Gabriel Landsbergis mentioned the “horrific massacres” in Bucha and other Ukrainian cities. Furthermore, the Lithuanian Foreign Minister warned that the scenes witnessed by the international community in Bucha might be only the beginning.

He further added that they might see more “horrific examples of war crimes” in other liberated cities. He even asserted that the war crimes committed by Russian troops in Ukraine will not be “forgotten.” Earlier on April 3, Landsbergis condemned Russia’s action in Ukraine’s Bucha and stressed that they can imagine what could be happening in other occupied regions.

He called on EU to adopt action, adding that purchasing Russian oil and gas is similar to financing the war crimes.