​Jamie Carragher raises a valid argument. With Philippe Coutinho’s representatives attempting to move heaven and earth to secure a January move to Barcelona, there’s a rather pressing question which needs to be asked: just what is the point?

It’s a question that both parties involved in this never-ending transfer saga need to consider. For Carragher, a man whose blood bleeds, well, red, it’s a no-brainer. In letting Coutinho leave this January, Liverpool would risk both their chances of a top-four finish and progression in the Champions League.
In reality, there are very few players in this current Liverpool side capable of emulating the Brazilian’s talents. His vision, his precision, his composure on the ball – these qualities bring an extra edge to Jurgen Klopp’s side and will be sorely missed when he eventually bids farewell to the Merseyside, whenever that may be. 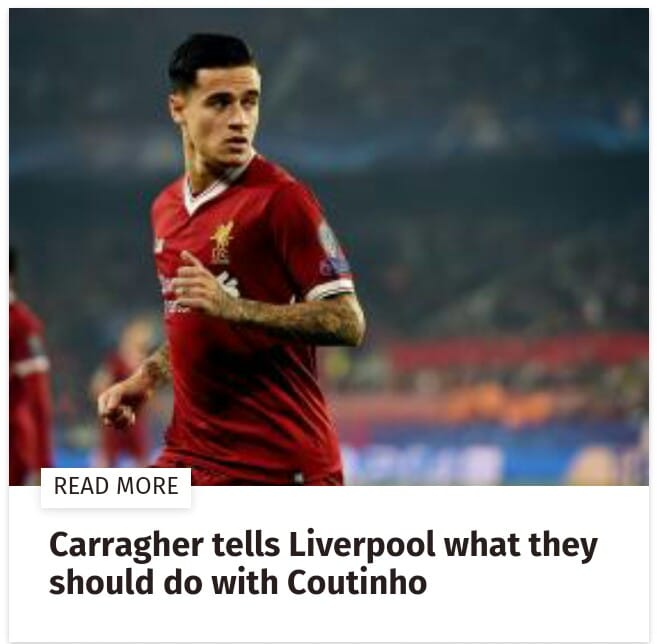 And whether or not Liverpool have the means to cover over the cracks until Naby Keita’s arrival in the summer remains to be seen. Much has been made of Mohamed Salah’s Anfield renaissance – and rightly so – but this isn’t to assume the Egyptian has the ability to fill the Coutinho-shaped hole that would appear following a January exit. Salah has his own responsibilities to focus on, his own records to break.
Coutinho remains a vital, and seemingly irreplaceable, cog of the Liverpool machine at this point in the season. There is far too much at stake for Klopp and his men. He cannot be allowed to leave – for now at least.
It’s a starkly different picture across the divide. For Barcelona  there’s ultimately very little need to sign the Brazilian at this moment in time. The league title is all but wrapped up, Coutinho would be ineligible to play in their European campaign and record-signing Ousmane Dembele is returning from his four-month injury lay-off.
Sourced by;  Sports.com