Man Hacks His Own Wife To Death With Machete Over Suspicion Of Infidelity, Attempts Suicide

Harrison Mutisya, 45, killed his wife, Ms Faith Mueni, 35, on the night of March 25 in Kikumbo village, Machakos county, before fleeing in the family car. 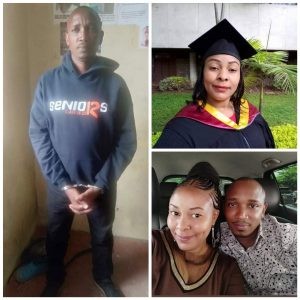 A Kenyan man has been nabbed by detectives after he allegedly murdered his wife by hacking her into pieces with a machete over suspicion of infidelity.

Harrison Mutisya, 45, killed his wife, Ms Faith Mueni, 35, on the night of March 25 in Kikumbo village, Machakos county, before fleeing in the family car.

The deceased was found in a pool of blood with deep panga cuts in the head and hands by the husband’s parents. The parents then informed the area assistant chief before reporting the matter at Konza police station.

The body of the deceased was taken to a Machakos mortuary where a post-mortem was carried out establishing the death was caused by multiple cuts on the body resulting in excessive bleeding.

However, on Thursday night, March 31, Mutisya booked himself into a room at a lodge in Mlolongo town from where he allegedly consumed a pesticide in what appeared to be an attempted suicide.

An attendant at the lodge reported to Mlolongo police station – OB 01/04/2022 – at 5.30am Friday morning that there was an unknown person who had booked into room number three at the lodge and had collapsed at the door with foam emanating from his mouth and nose.

He was then rushed to Kitengela Sub-county Hospital unconscious; about 15 kilometres from their home where he allegedly committed the murder.

He was rushed here in bad shape but we managed to stabilize him. He is now out of danger,” intimated a nurse who attended him.

Around 9am on Friday when Mutisya gained consciousness, there were police officers beside his bed at the hospital’s casualty section and he was immediately handcuffed.

Directorate of criminal investigations, DCI, in a statement on Friday, said preliminary investigations indicate that on the fateful day, Mutisya leapt from their matrimonial bed in the dead of the night and reached for the machete, which he used to attack his wife as their 4-year-old daughter slept in an adjacent room.

“We received information regarding the gruesome murder, through the DCI hotline and immediately a team of seasoned detectives drawn from the elite Crime Research & Intelligence Bureau (CRIB) joined their Machakos counterparts to hunt down the suspect.

“Mutisya later abandoned his vehicle at Emali, to shake off the detectives who were hot on his trail, prompting them to employ other tricks in the book to trace the suspect.

“Last night, the suspect booked himself at a guest house in Mlolongo but early this morning when he realized that his moment of arrest was nigh; he swallowed cockroach bait in a bid to fix his own appointment with his maker.

“But as fate would have it, the poison took long to take effect and Mutisya was found on the floor of the room gasping for breath, while foaming from the mouth and nose.

“The officers who found him rushed him to Kitengela Level IV Hospital, where he received treatment and is currently a guest of the state at Mlolongo police station.

“He will be arraigned in court on Monday, to answer to charges of Murder contrary to Section 203 as read with Section 204 of the Penal Code.