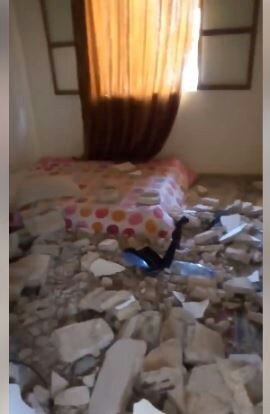 Serious tragedy was averted yesterday when a man luckily came out alive after his ceiling collapsed in the room.

The unnamed man’s brother, Stephen Chidiebere Anoro from Owerri, Imo, took to Facebook to share the story. According to him, a portion of the house (the ceiling) fell on his brother while he was in the room but he narrowly escaped the tragedy and came out alive.

An excited Stephen took to Facebook to share a footage showing aftermath of the incident as he wrote; Friend and friends make una follow me thank God for savings the life of my brother yesterday being 12th September 2018..”