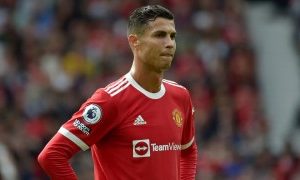 Manchester United will only allow Cristiano Ronaldo leave on their own terms.

This is according to Sky Sports News chief reporter, Kaveh Solhekol.

Although United’s public stance is that Ronaldo is not for sale, they are ready to let the player leave if a deal that suited all parties is agreed.

“Manchester United’s official position is that Cristiano Ronaldo is not for sale.

“But United would let him leave if a deal could be agreed with another club which suited all parties.

“If Ronaldo was to leave, it would be on United’s terms as well as Ronaldo’s,” Solhekol said.

Chelsea, Bayern Munich and Napoli are all monitoring Ronaldo’s situation at Old Trafford.