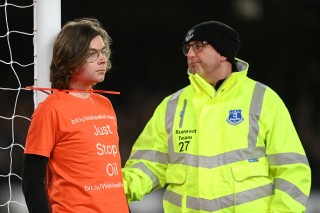 A man has been arrested after causing a bizarre stoppage in Everton’s dramatic 1-0 win over Newcastle by tying himself to one of the goalposts.

Alex Iwobi’s strike in the ninth minute of stoppage-time gave the ten-man Toffees a crucial win in their bid for survival.

However, the reason Iwobi was able to strike so late was due to a lengthy stoppage earlier in the second half after a man tied himself to one of the posts by his neck at the Gwladys Street End.

After a stoppage of about eight minutes, the man, who sported a shirt with the words ‘Just Stop Oil’, was freed by security and led away from the pitch.

It took half-a-dozen people and bolt croppers to get the job done.

There were unsavoury scenes after the man, a 21-year-old called Louis, was carried from the pitch, with Toffees fans seen throwing objects at him.

Meanwhile, one fan ran on the pitch in an attempt to attack him. The supporter was apprehended before being led away.

A group called Just Stop Oil, who are protesting the expansion of oil fields in the North Sea, have claimed responsibility for the incident. 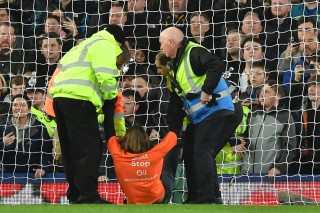 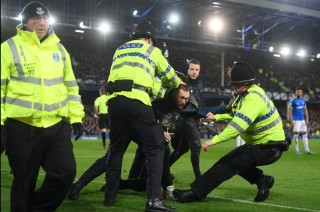 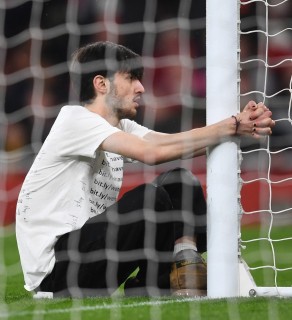 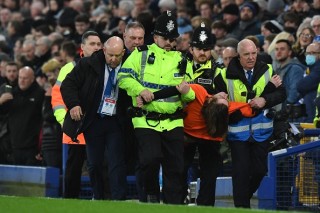 Merseyside Police said on Thursday evening: “We can confirm a man was arrested after encroaching on to the pitch during the Everton v Newcastle United Premier League fixture.

“At around 8.55pm it was reported that a man disrupted the match by running on to the pitch and tying himself to the goal post at the Howard Kendall Gwladys Street End.

“The suspect, a 21-year-old man, has been arrested on suspicion of pitch encroachment and he is now in police custody. The game resumed and has now concluded.”

talkSPORT understands the same organisation conducted a protest which saw another man glue himself to a goal post at the Emirates Stadium during Arsenal’s defeat to Liverpoolon Wednesday.

Just Stop Oil quoted Louis as saying: “It’s 2022 and it’s time to look up, time to step up and not stand by. It’s time to act like it’s an emergency.

Just Stop Oil added in a statement: “Our government is betraying us by funding new oil fields in the North Sea.

“New oil means destruction of our children’s future. It means war on small island states. And it means suffering now for the poorest and most marginalised in all regions.

“We must #JustStopOil. It’s a no-brainer.”

The incident disrupted the flow of the match, which also saw Toffees midfielder Allan sent off following a VAR check for a challenge on Allan Saint-Maximin.

Frank Lampard’s men looked like they’d have to settle for a point but Iwobi had other ideas with his composed finish in the ninth minute of additional time.

Newcastle boss Eddie Howe admitted he was stunned by the incident and suggested it affected his team’s momentum.

“I’ve never seen anything like that,” he said. “At first, I didn’t realise what was happening to start with. It was a big delay.

“I’m not using it as an excuse, but I don’t know if that affected us, because certainly we weren’t the same team in the second half.”