A 94-year-old Kenyan man identified as Hiltan Kalugho who left his home 42 years ago has returned.
Kalugho had left his country home in 1980 hoping to make some fortune in Tanzania only to return back home with nothing after four decades and two years. 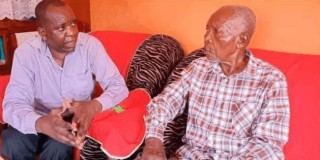 Unfortunately for Kalugho, his wife and two of his 7 children passed away within the period of his absence.

According to the aged man, since he couldn’t make the expected fortune despite working at big reputable companies in Tanzania, it was hard for him to return home as a failure.

He added that he never remarried during his time abroad because he longed to see his family, including his wife Dreda Mshai who died in 2007.

In his words: “I left home in search of greener pastures because I wanted a good future for my children. Unfortunately, I was unable to come back home because I did not get the money I expected to get to feed my family. We did not get any breakthrough. What we used to get was only enough to sustain us.

“I feel so bad that some of my family members are not here to witness the reunion. I had longed to see my wife and all my children.”

Meanwhile, Kalugho’s return was facilitated by a pastor. His son, Mnjala Mwaluma narrated how his father was found after years of fruitless search.

His son said: “Recently I received a call from a pastor telling me my father had been traced in Tanzania. He came with him to Mombasa where we went to meet him.”