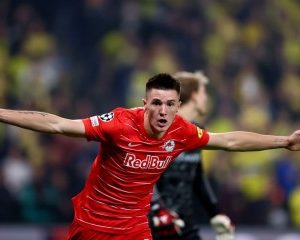 Sesko, 19, has emerged as a priority target for Man United manager Erik ten Hag late in the transfer window.

Man United chief, John Murtough recently jetted out for talks with the player’s agent as he is eager to deliver a fourth signing for Ten Hag before the summer transfer window closes on September 1.

Man United are set to go into Sunday’s Premier League opener with Brighton short on firepower.

Edinson Cavani has left Old Trafford, Mason Greenwood remains unavailable and Anthony Martial has picked an injury that rules him out of the Brighton clash.

Man United have also been linked with Sesko at a time when Cristiano Ronaldo’s future is up in the air, with the Portugal captain eager to join a team who can offer him Champions League football this season.