In an extraordinary interview, Andrey Kortunov said the invasion has been ’embarrassing’ for Russia and many Russians are ‘depressed’.
“Russian president Vladimir Putin’s adviser has criticized him for invading Ukraine. 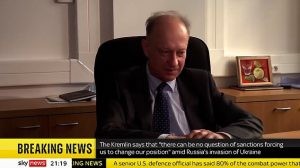 In an extraordinary interview, Andrey Kortunov said the invasion has been ’embarrassing’ for Russia and many Russians are ‘depressed’.

Kortunov who is a foreign policy expert, and the director general of the Russian International Affairs Council, fears Putin is being influenced by his inner circle and says the leader has made his country a pariah on the international stage.

He told Sky News: ‘I was shocked because for a long time, I thought that a military operation was not feasible. It was not plausible.

‘My advice today, given the current situation on the ground, would be to turn a ceasefire into the top priority. We have to stop the conflict.’

He said Ukraine and the West needs to get round a negotiating table with Russia to bring about an end to the costly war.

It comes amid reports Putin recently narrowed his group advisers to a small number of securocrats known as siloviki who consist of generals, friends and spies.

He added: ‘I’m depressed. I think many of us are depressed.

‘You know, it’s something that we should never forget.’

Any public criticism of the Russian state can result in fines of up to £6,200 or jail sentences, under laws introduced in 2012.