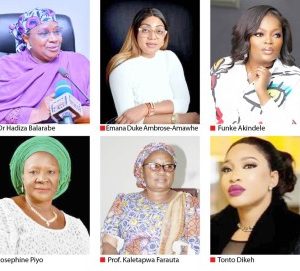 Ahead of the 2023 general elections, some governorship candidates have picked female running mates for the race, thus brightening the chances of more women participation in governance, Daily Trust Saturday reports.

In the aftermath of the governorship primaries of the two major political parties, only one woman, Aishatu Dahiru Ahmed (Binani) emerged victorious, defeating other top male political bigwigs to become the All Progressives Congress (APC) flag-bearer in Adamawa State.

However, in what looks like a departure from the norm, more governorship candidates have picked women as running mates, swelling the number of females who would be on the ballots in the 2023 governorship election.

There have been concerns over low participation of women in politics and this had led to clamour for 35 per cent affirmative action to ensure inclusion of more women in governance. The choice of more women as governorship running mates this time around may be a response to the clamour.

The governorship candidate of the All Progressives Congress (APC) in Kaduna, Senator Uba Sani picked Governor Nasir el-Rufai’s deputy, Dr Hadiza Balarabe as his running mate for the 2023 gubernatorial election in the state.

Sani who made the announcement in Kaduna after consultations with critical stakeholders said, “I am happy to announce that I have picked Dr Hadiza Sabuwa Balarabe as my running mate in the 2023 governorship election in Kaduna State.”

Dr Hadiza Balarabe is the incumbent deputy governor of Kaduna State. She was born in Sanga Local Government Area of Kaduna State in 1966. She attended Girls’ College, Soba for her secondary education.

She read Medicine at the University of Maiduguri and graduated in 1988. She was a senior registrar at the Ahmadu Bello University Teaching Hospital before joining the services of the Federal Capital Territory (FCT) in 2004.

Dr Balarabe served as the executive secretary of the Kaduna State Primary Health Care Development Agency before she became Kaduna deputy governor. She is married to Alhaji Mohammed Balarabe.

Her nomination is historic as she is the first woman in the North East to be nominated for such a position.

She was born on November 28, 1965 at Numan. She hails from Numan Local Government Area of Adamawa State.

In Plateau, the gubernatorial candidate of the Peoples Democratic Party (PDP), Caleb Mutfwang, picked Mrs Josephine Piyo as his running mate ahead of the 2023 general elections.

She was unveiled at a brief ceremony held at the state PDP secretariat in Jos recently.

Piyo, a grassroots politician, was chairperson of Riyom Local Government Area of the state and former lawmaker in the Plateau State House of Assembly.

Mutfwang said the choice of Piyo was about giving voice to the voiceless.

Some of you will recall that in the course of my campaigns before the party primaries, I committed to giving a voice to the voiceless. I make bold to say that a critical segment of our society that is often neglected in leadership considerations is the womenfolk, yet they form a formidable percentage of our population. For me, giving them a voice is a compelling necessity,” he said.

Piyo is a health care worker and had served as a public administrator before her foray into politics.

The female running mate, who accepted the position, expressed gratitude and assured the state of working to give the party victory.

Emana’s emergence was announced recently at the party’s secretariat in Calabar, the state capital, amid fanfare.

The chairman of the party, Venatius Ikem, who spoke after the announcement, said her choice was divine and that they consulted widely, adding that the party needed new and younger faces, especially from the womenfolk.

Accepting the challenge, Emana said many battles had been fought and won, adding that settling for a woman as PDP running mate in Cross River was a weighty statement.

“For Cross River to have a female running mate is a victory already for the party. You have given me this task in trust. It is a big challenge. I boldly accept it,” she said.

Emana is a youthful female with an impressive character, academic and career achievements and great exposure.

She is from Akpabuyo Local Government, Cross River south senatorial district. She is a wife and mother. It is believed that she would bring in her expertise as a broadcaster and crisis management strategist to ensure good governance in the state.

Passionate about good governance and nation building, she has anchored current affairs and political news programmes in Nigeria’s mainstream media for over a decade before venturing into private practice.

Emana is a prolific writer with several of her articles published in national dailies for the past five years, mostly under a pseudonym.

Tonto Dikeh, a Nollywood actress, musician and songwriter, was picked as running mate to the governorship candidate of the African Democratic Congress (ADC) in Rivers State, Mr Tonte Ibraye.

The actress recently took to her official Instagram page to announce the news and as well thank the candidate for choosing her.

She wrote, “I thank Mr Tonte Ibraye (@tonteibraye), the governorship candidate of the ADC, Rivers State, for nominating me as his running mate.

“We are looking forward to investing massively in social protection, creating a social value system for young people, increasing women’s inclusion in our governance system, supporting small businesses and strengthening our traditional institutions to be active players in the drive to bring sustainable development to the good people of Rivers State.”

Tonto Dikeh is from Ikwerre, Abio-Okpa, Rivers State, Nigeria. She is the founder of the Tonto Dikeh Foundation established on August 27, 2000 with the goal of lending a helping hand to the less privileged.

She attended both primary and secondary schools in Port Harcourt, Rivers State, Nigeria. She gained admission into the Rivers State University of Science and Technology and bagged a degree in Petrochemical Engineering.

A Nigerian actress, Funke Akindele, emerged the running mate to the governorship candidate of the PDP in Lagos State.

The actress and filmmaker was earlier nominated as a prospective running mate among five people.

Akindele-Bello Olufunke Ayotunde, popularly known as Funke Akindele or Jenifa, is a Nigerian film actress and producer. Akindele starred in the sitcom, “I Need to Know” from 1998 to 2002, and in 2009, she won the Africa Movie Academy Award for Best Actress in a Leading Role.

She was among the five names released as the potential running mates of the party’s governorship candidate, Alhaji Abdulaziz Olajide Adediran, popularly known as Jandor.

She is the second Nollywood actress picked for a deputy governorship position.

Akindele was born on August 24, 1977 in Ikorodu, Lagos State. She attended Grace Children School, Gbagada, Lagos State. She obtained a National Diploma (ND) in Mass Communication from the Moshood Abiola Polytechnic, Abeokuta. She also earned a Law degree from the University of Lagos.