Melania Trump To Visit Ghana,Kenya And Other African Countries Next Month 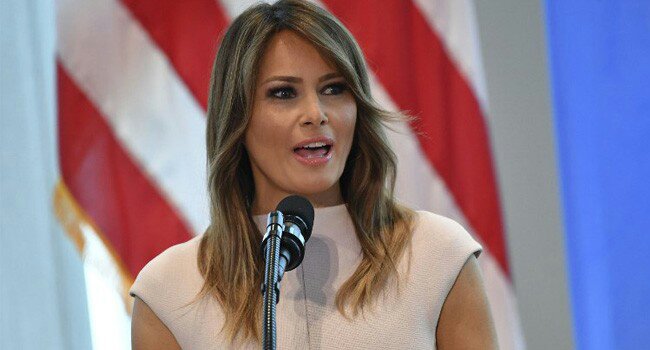 US First Lady Melania Trump at the US Mission to the United Nations in New York on September 26, 2018. MANDEL NGAN / AFP

US First Lady Melania Trump on Wednesday announced that she would visit Ghana, Malawi, Kenya, and Egypt next week, kicking off her first major international solo trip to promote child welfare and education.

Trump, 48, made the announcement at a reception welcoming spouses of visiting heads of state and other foreign delegations on the sidelines of the UN General Assembly.

“October 1 will mark the first day of my solo visit to four beautiful and very different countries in Africa: Ghana, Malawi, Kenya, and Egypt,” she said.

Trump said those countries had worked alongside the US Agency for International Development, with whom she has been organizing her trip, in making “great progress in overcoming some of their biggest challenges.”

She said that she was looking forward to taking with her the message of her signature initiative, “Be Best,” which she set up with the goal of focusing on children’s well-being, as well as social media use and opioid abuse.

“I am so proud of the work this administration is doing through USAID and others, and look forward to the opportunity to take the message of my Be Best campaign to many of the countries and children throughout Africa,” she added.

“Whether it is education, drug addiction, hunger, online safety or bullying, poverty or disease, it is too often children who are hit first and hardest across the globe.”

The first ladies of Ghana, Kenya, and Malawi attended the reception, as did the wives of US Vice President Mike Pence and Secretary of State Mike Pompeo. Sara Netanyahu, the wife of the Israeli prime minister, was also there.

Trump thanked, in turn, the first ladies of Ghana, Malawi, and Kenya, saying how much she was looking forward to visiting their countries. She did not say how long her visit would take.

In Ghana, she said USAID programs have focused on healthcare; in Malawi, on education as the key to combating poverty; and in Kenya on programs including early childhood education, wildlife preservation, and HIV prevention.

US President Donald Trump and Melania hosted Kenyan leader Uhuru Kenyatta and his wife at the White House last month.

In Egypt, the US first lady’s final stop, she will highlight tourism and preservation projects as well as issues concerning women and religious minorities.

“Each of us hails from a country with its own unique challenges, but I know in my heart we are united by our commitment to raising the next generation to be happy, healthy and morally responsible adults,” Trump told the reception.

Her husband has yet to travel to Africa in office and fanned major controversy at the start of the year for allegedly disparaging “shithole” countries on the continent.

Earlier on Wednesday Donald Trump trailed his wife’s announcement, saying “we both love Africa. Africa is so beautiful.”

In September 2017, the mother of one and the Slovenian-born former model went alone to Toronto, where she met Britain’s Prince Harry and attended the opening ceremony of games he organizes for disabled and wounded veterans.

Melania Trump has also accompanied the US president on visits to Europe, Asia, and the Middle East.

The White House said the trip would take place in the first week of October, and focus on maternal and newborn care in hospitals, education for children, the culture and history of each country, and how the United States is supporting them on their journey to self-reliance.